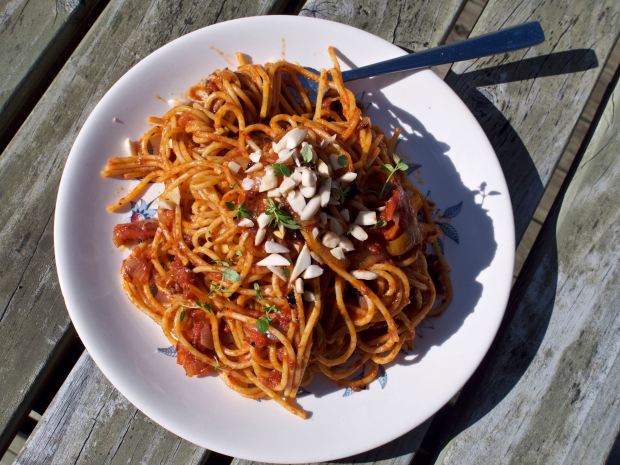 Every now and then I get jolted by the fact that 90% of the recipes in my cookbook (yes, my cookbook, Hungry and Frozen: The Cookbook, 2013, Penguin, a highly underground cult item by which I mean it was aggressively discontinued less than a year later) were only tested once, which was entirely due to financial reasons (I didn’t anticipate the responsibility of paying for ingredients and resources for testing 150+ recipes falling to me) coupled with a certain clinging need to make it seem as though everything was fine and this is definitely what I expected from the process, and nothing to do with my lack of dedication to recipes that are proven to work.

Indeed, if looking up the word “science” on Wikipedia, ctrl-F searching for the word “test” and then immediately closing the tab without reading any of its content is anything to go by, making something once isn’t even technically testing it, you’re just, you know….making it once. I’m fortunate in that I can usually trust my oddly innate recipe-creating abilities but I nevertheless keep a place in my brain solely dedicated to housing the fear that someone will email me all like “I made that cake in your book and it wouldn’t rise and the centre was all gluey and undercooked and the flavour had little to recommend it and my wife cited it as grounds for our subsequent divorce proceedings which were fast-tracked with shoddy paperwork and little emotional closure.” 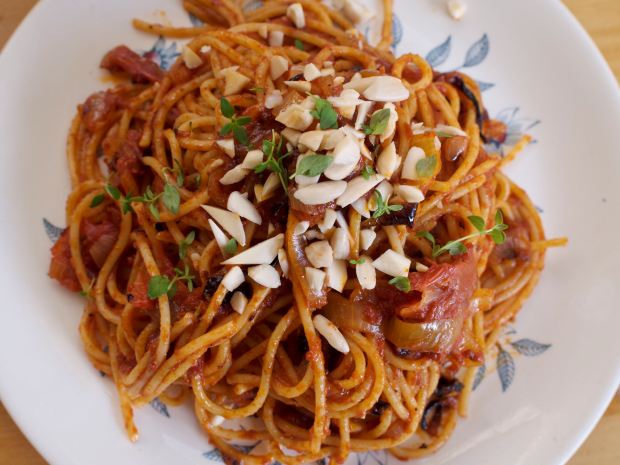 But this recipe, this recipe I made three times and am thus immensely satisfied that it’s neither fluke nor failure – no seasoning with plausible deniability here, confidence is my condiments. Yes, I’m genuinely embarrassed at myself for writing that out, and yes, no, I’m not deleting it.

The reason I made it so many times was the reason for its existence in the first place: it’s a very, very cheap recipe, a real something-from-nothing, flying by the seat of your pants that are currently being worn by the rabbit you pulled out of a hat type thing. The sum is greater than the whole of your pants: a mere onion, a lone tomato, a charmless can of tomato puree, the most off-brand dried spaghetti the supermarket can procure, it all comes together under the heat of the oven to evoke the taste of hours of toil and multitudes of ingredients. It somehow suggests the flavour of tomatoes that have been plucked in most reverent silence in the holiest of Roma’s hills while also hinting at the thickly-sauced comforting promise of canned spaghetti, I’m talking old school canned spaghetti that exists in my memory and not anymore on the supermarket shelf because I know they’ve changed the recipe to make the sauce cheap and watery and the noodles structurally unsound but in the early nineties when, you have to bear in mind, there were only like four different things that had been invented to eat, canned spaghetti was genuinely ultimate and tasted of abundance. 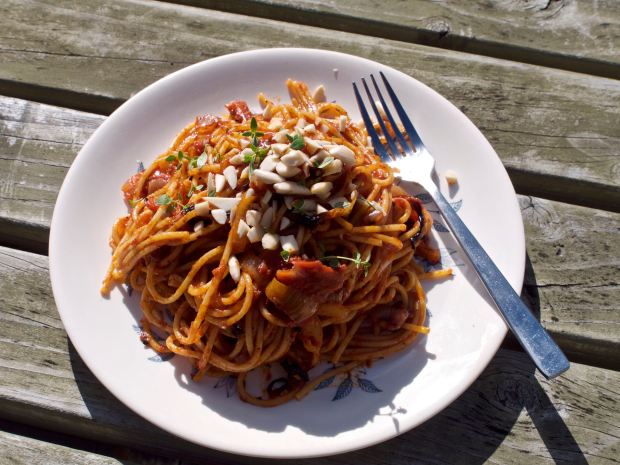 The key thing here is that you roast the absolute living daylights out of the ingredients. That’s all there is to it. Without that level of heat the tomato puree will taste like expired iron tablets and the onion will be bitter, but under the oven’s blaze it all melts and bubbles and gets sticky and crunchy and charred around the edges, hence the word caramelised in the title since that’s precisely what you’re aiming to do.

It’s incredibly delicious, which is the other reason I’ve returned to it repeatedly, just so immensely full-throatedly rich and intensively tomato-ish and hearty and messy and somehow really buttery and it’s even amazing cold – but then I always did favour the spaghetti unheated, straight from the can – so your opinion of this habit may colour the value that you place on that last opinion. 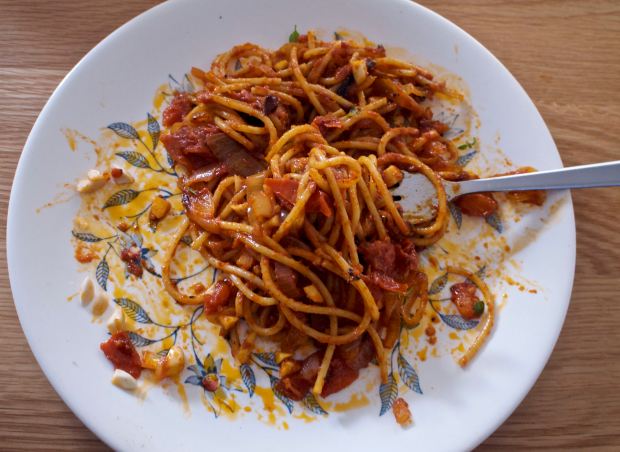 Now generally I like to give many options and segues of other ingredients you could include but honestly this is perfect as it is, and because there’s so little going on each ingredient is proportionately crucial. The only leeway I would offer is that if you can’t get hold of a whole tomato for whatever reason it’s not the end of the world, but it really does add texture and body and I assure you, even the most anemic-looking middle-of-winter tomato can be transformed by this recipe. The canned tomato puree must ideally be puree – not canned chopped tomatoes, not passata, not paste – for it alone hits that absolute sweet spot of thick texture and liquid sauciness. If you’re considering reducing the olive oil, first of all, grow up, and second of all, if anything, add more. The olive oil is central to the caramelisation and the richness and the texture and the flavour. While I’m being a fusspot I really feel like this sauce lends itself directly to actions like dramatically twirling pasta round your fork and then dramatically lifting the fork higher than your head before dropping the pasta into your open mouth getting sauce on your chin and laughing heartily yet attractively like a free-spirited character in an arthouse film or a prestige drama about a family of tension and tradition in equal measure and you can really only get that with spaghetti but if all you’ve got to hand is penne it’ll be like, literally fine.

A recipe by myself. (It’s much simpler than the length of the recipe makes it look, I’m just explain-y.)

Set your oven to 220C/430F. Peel and thinly slice the onion into half-moons, and roughly chop the tomato. Get a small roasting dish – for example, the sort that you might bake brownies or a slice in but also would make yourself a small quantity of roast vegetables, you know, those standard smallish rectangular tins – and place the onions and tomato on one side/half of the roasting dish and tip the can of puree onto the other half. Drizzle everything liberally with the olive oil – like a full four tablespoons is entirely ideal here – and sprinkle generously with salt and pepper. Don’t stir it yet.

Roast it for about thirty minutes, stirring one or two times during this time only once the onions and the tomato have collapsed and got a little browned/crisp around the edges. If it looks like it needs more – and it well might – return it to the oven for another ten to twenty minutes, but continue to keep an eye on it as there’s a fine line between crispy and straight up burnt. With this in mind I usually start the roasting dish on the top shelf and move it to the bottom shelf towards then end.

While all this is happening bring a large pan of salted water to the boil (which I always do by boiling the jug first and then pouring that into the pan rather than heating up the water on the stove top, it’s much faster) and cook the spaghetti until it’s tender – twelve minutes or so should do it.

Spatula everything onto a plate, scraping as much of the sauce and any crunchy almost-burnt bits as you can from the roasting dish (I sprinkle a tablespoon or so more pasta cooking water into the dish and swirl it round to pick up every last bit of sauce) and then garnish, if you like, with fresh thyme or basil (or both!) and chopped almonds, and perhaps, one last drizzle of olive oil.

Serves 1, although I think you could quite comfortably get away with making this serve two by using 200g pasta but keeping everything else the same.

I asked Ghost what he thought about pasta and first he was just like “PASTA” over and over again but then he was all, “as August de LaCroix said in 1842, ‘the flâneur is to le badaud what the gourmet is to the glutton,”‘ and “the badaud was later defined as “curious, astonished by everything he sees, he believes everything he hears, and he shows his contentment or his surprise by his open, gaping mouth.”‘ And I was like “Ghost, that’s exactly what I would’ve said, in that order!” (As you can see from the photo, Ghost and I are often of one mind. One…at best.)

As always, thank you to my important Patreon patrons for supporting my writing. If you have made it through this genuine nonsense and you’re like, this gal’s really going places and I want to ride those coat-tails to the top then you too, should become a patron! A mere handful of your dollars per month directly influences my ability to write and live and I might be able to create a cookbook with recipes tested more than once. You receive exclusive content in return, like book and film reviews or recipes or what star sign I believe each character from Gavin and Stacey is. Signing up is easy and my gratitude is real.

title from: Brimstone and Fire, by Cyndi Lauper. Is this one of her best songs? Honestly, I think no. But it is fine, and she does talk about spaghetti in an alarmingly relevant way.

Falling, by Xiu Xiu, from a commissioned series they did of covers of music from Twin Peaks. This is atmospheric and foreboding, with powerful momentum dripping in slow motion like honey from a spoon, I love it. (This album was described as one of their most listenable and you know you’re really on a level when using material by David Lynch makes you more accessible.)

The Sweetest Girl, by Scritti Politti, I just adore this song, all woozy and dreamy and sinister and lovely and highly amenable to listening to on a loop about twelve times before it even registers that the song hasn’t ended yet.

Next time: If you absolutely cannot tell I had a terrible night’s sleep before writing this and perhaps it’s that lack of sleep talking but I might be ready to try making ice cream again, actually.