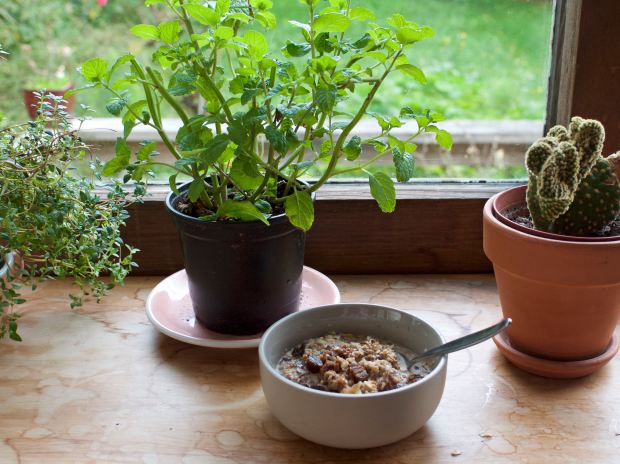 I often say (and prove) that it takes a village to raise me, as is the case with today’s recipe. I was gently prompted by my wise friend Charlotte to get snacks (that was actually essentially the entire advice but I was like my god, a fresh and bold perspective from a true maverick, which tells you what kind of baby the village is dealing with here. But also: having snacks on hand is useful! I mean, did you know that, without someone telling you?) And then, acting upon this advice and making myself a large batch of granola – cheap, filling, nutritious, snacky – I was suddenly panicking that I wasn’t going to get it photographed before darkness fell and my wise friend Kate was simply like “why don’t you take a little out of the oven and put it in a bowl and photograph that while you carry on cooking the rest” and I was like my stars, a genius walks amongst us, lo and behold her shrewdness meant I was able to take the photos you see here in the last fifteen minutes of workable light that the day held, and in doing so I realised I’d actually forgotten when I’d even put the granola in the oven in the first place, and it was in fact extremely ready to come out anyway. This all might sound really stupid but I’ve been experiencing higher than usual anxiety (I’m fine and my higher-than-usual anxiety is way lower than the everyday-anxiety of a few short years ago but it still comes around, you know?) and when it’s there it means my brain is less able to put one foot in front of the other than usual and my usual is honestly not that impressive anyway, and having things slowly spelled out to me still feels like I’m trying to sit an exam that I haven’t studied for, and what looks like a simple conclusion seems like the most staggering realisation.

I have made a lot of granola in my time, and I confidently assert that this is one of my best. To expound the “get snacks” advice – now that I’m not working, I (a) have resumed a relatively normal body clock and so am actually eating breakfast, (b) am not getting fed at work and so need way more of those aforementioned snacks, and (c) I’m not earning any money so it behooves me to make something at home in large quantities rather than recklessly just buy food when I’m hungry. Granola is a tidy solution. It’s simple to make, it lasts for ages, it’s not too expensive to put together, it’s nutritious, and it tastes good at any time of the day.

Set your oven to 150C/300F, and get out your biggest roasting dish – the sort that’s the size of one of the entire oven shelves ideally – and line it with a large piece of baking paper.

Pour the oats, sunflower seeds, walnuts and linseeds directly into the paper-lined roasting dish, and stir to combine – or just use your hands to shuffle everything about. Drizzle over the oil, then the syrup – and I recommend it in this order so that the syrup slides easily out of the now-oiled measuring cup – and stir it in, or again, use your hands. Place on the lowest shelf of the oven and bake for 45 minutes to an hour, stirring once or twice partway through, till it’s golden and toasty and browned. Allow to cool, then stir in the dates, chia seeds, cinnamon, and salt, then taste some to see if it needs anything extra. Store in an airtight container. This makes a lot.

This recipe is very comfortingly low-key – the caramel flavour comes from the date syrup, which helps give that requisite crunchy clumpiness to the oats as it crystallises under the oven’s gentle heat, plus actual dates, which taste like little chewy nuggets of toffee. Date syrup is relatively easy to get hold of these days but if you can’t, golden syrup or maple syrup would be fine instead. It’s worth hunting for though – date syrup has this almost liquorice intensity without being too overtly sweet, I really love it. The slowly toasted walnuts, buttery and soft, mesh so well with the date flavour but obviously granola is one of the easiest things to go off-course on to suit your own tastes, needs, and accessibility. You could consider adding almonds, brazil nuts, cashews, hazelnuts, pumpkin seeds, sesame seeds, I’m just naming nuts and seeds now but you get the idea, dried apricots or dried apples or dried cranberries or figs, you could leave out the coconut or add heaps more, you could leave out the chia seeds or find an even more expensive superfood to add. I went with lots of 1/2 cup measures to make things easier but if you’ve got more or less of any ingredient that’s totally fine.

By this point your finished product might end up being several times removed from mine, but like, I only came up with this particular recipe because I wanted to use up as many ingredients as possible that I already owned, so why shouldn’t you? And the point is: we’ll both have snacks.

If you’d like further granolae of mine to consider, I recommend my recipes for Lux Maple Granola, or this Buckwheat, Cranberry and Cinnamon Granola (both gluten-free for what it’s worth) or Strawberry Jam Granola which I blogged about the last time I was staying with Kate and Jason almost five years ago (as well as taking a village it also took a village, and Kate and Jason are such village people.)

PS: As always, thank you in particular to my Patreon patrons for supporting me and my writing, you’re literally so immensely important. A mere handful of dollars per month directly influences my ability to write and indeed, snack, and gets you exclusive content in return, like book and film reviews or what star sign I believe each character from Gavin and Stacey is or a recipe for the best vegan scones. Signing up is easy and my gratitude is real.

title from: Metropolis, by Janelle Monáe, one of her very, very early works, I’m talking literally a demo album from 2003 – although its spaciously lush r’n’b sound and conceptuality feels amazingly recent.

Waiting Room, by Fugazi. I just love this lurching, shambling song with its oddly sanguine call-and-response. (Credit where it’s due: I was reminded of this song after listening to an excellent Spotify playlist from La’Shaunae, one of my favourite models, for Tunnel Vision, one of my favourite fashion companies.)

My Sweet Lord, by George Harrison, look, it’s just very twinkly and uplifting and I have a real thing for songs that appear to start in the middle of the chorus and then just stay there, simply keep giving you more and more chorus, bigger and bigger, it lends them a weirdly addictive urgency of sound.

Mein Herr, by Liza Minelli, from Cabaret. Such a fantastic number – there’s something so satisfying about the way the lyrics travel across the beat in Minelli’s rich voice – “it was a fine affair, but now it’s over, and though I used to care, I need the open air” – and that exquisite, deliberating Bob Fosse choreography, so much about the negative space, with the bodies almost frozen in place but for a wiggling finger or rotating ankle, until it explodes into the floor-slapping finale.

Next time: I made a spaghetti recipe that turned out surprisingly amazing for how simple it was, I intend to try it again and if it turns out that it wasn’t a total fluke, well, you’ll be hearing about it.

5 thoughts on “breakfast on incandescent, built to chew, dream to find another world”