I normally put this bit at the end but thought I’d be creative and start with it this time: Patreon! Thank you to my patrons who have been supporting me from the ground up, you are amazing and important and powerfully astute. If you’d like to be included in such praise (and I could go on) then by all means sign up to my Patreon as well, and in doing so you will be able to receive all my content written for your eyes only.

My relationship with butter is a well-trod path on this blog, from the ten-ish years I spent smothering my personality with it to suddenly pivoting without warning to veganism last year. In October I talked about buying non-dairy butter for the first time (I don’t know why I’m weird about the word margarine but there’s just something so defeatist about the way its spreadably soft consonants sag in the mouth) and to be honest with you, since then I’ve used it very, very little, because though it tasted fine, and was okay in recipes where its flavour could be heavily masked (like Champagne Passionfruit Buttercream or Nanaimo Bars) it did not become exciting or inspiring in and of itself like butter was to me.

And though I like to frame my choice to be vegan in terms of all that I have, and not about what I lack (I mean, I’ve never eaten so many cashews in my life, I couldn’t say that a year ago!) I do miss that capitulation-makingly perfect meeting of flavour and texture and possibility that is real butter. Everything else I’ve happily let go of, and no longer sense any petulant longing from my tastebuds for cheese or bacon or steak or whatever, but butter…butter I sometimes still think of wistfully, y’know, in the form of a montage of the good times we had with Happy Together by The Turtles playing overtop. (Okay I also miss white chocolate and I know it’s not cool but it’s my favourite and I do get sulky over that sometimes. The only vegan stuff I’ve found is inexplicably like $9 and tastes like coconut, change my mind.)

I had accepted that this was something I was going to just live with as a result of my own choices, which is totally fine, but then I found, or rather, re-found, a recipe for homemade vegan butter that had been sitting on my internet browser since last year. (Yeah, I have 72 tabs open on my browser at all times, which, let’s blame on my ADHD, like when I was a kid and found it impossible to clean my room and theorised that the system worked because everything was on the floor where I could see it, a theory which held no water because with everything on the ground it was of course impossible to find anything, a standard I unfortunately still live by but at least no longer try to justify. Naturally, with this many tabs shoulder-to-shoulder I often forget for weeks, months on end, what I’ve actually got open.) So I re-discovered this tab just last week and decided that the recipe, on a site called The Virtual Vegan, looked as promising as it did upon first click: it claimed to be spreadable, meltable, useful in cooking, and most important, it said it would taste actually buttery.

The key things holding this together are a combination of olive oil and refined coconut oil, by which I mean – and the recipe stresses the importance of this – it’s been treated to taste neutral rather than coconutty, plus ground almonds which somehow dissolve into the liquid but also help give it body and texture. I made a couple of tiny changes: I didn’t have any nutritional yeast and decided to just push ahead anyway, I used red wine vinegar instead of the stipulated cider vinegar because I feel like the former has a certain layered richness to it, and I added a tiny pinch of sugar for balance. It’s easy enough to make – just give the ingredients a good hard blend and then pour it into a jar and wait for it to solidify in the fridge. So I did.

And…it tastes really, really good. It’s not butter, but it’s a whole lot closer than anything I’ve hitherto tasted. It has that kind of fluttering, mouth-filling sweet richness, that full-bodied tangy creaminess, it just has something that I’ve been missing. Genuine deliciousness! I made toast for the first time all year and spread the butter across and topped it with some Marmite and I can’t remember the last time I enjoyed that simple, unimpeachable pairing. 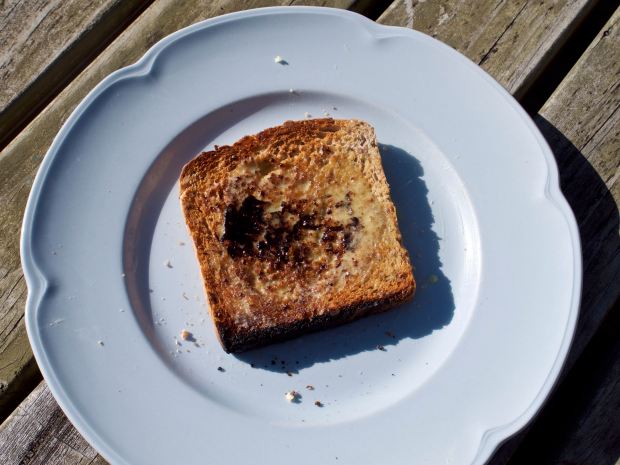 Adapted slightly from this recipe at A Virtual Vegan.

Place everything except the oils into a blender – ideally a high-speed one – and blend the hell out of it till it looks smooth and creamy. Add the coconut and olive oils and blitz till it’s very thoroughly combined. Pour into a large clean jar and refrigerate for a few hours till it’s solid.

I recommend going and reading the recipe at A Virtual Vegan first, as it has heaps of information and recommendations.

I feel like I want to say sorry to the non-vegans for going on about being vegan and sorry to the vegans for complaining about wanting butter, (I also feel that so much of how I talk about myself is done with an apologetic inflection: I’m trying to be a writer (sorry!) I’m vegan (sorry!) What’s this I’m listening to? Uh, it’s a Broadway musical (sorry!) I’m an Aries (sorry! Both for talking about astrology and for being an Aries.) And let me stop you right there, I hear what you’re thinking: these apologies are both necessary and justified.) If you personally are okay with eating butter then honestly you should probably just keep doing that for as long as you can stand it, but if you don’t eat butter for whatever reason, well, I was highly impressed by this recipe and have gone through two jars of it already. It’s so straightforward to make, the ingredients are all recognisable, it makes a great white sauce, there’s something pleasingly Enid Blyton-ish about butter in a jar, and most importantly, it’s genuinely, properly delicious in its own right. The chorus of Happy Together is getting fainter (and I can now close one of those 72 open tabs.)

(One more thing about being vegan that is possibly not as universal as I initially thought: I am a dewy-eyed sucker for vitamins and supplements but it seems now ever more so and while dissociating at the supermarket I bought this stuff called pea protein which is made from fermented lentils and Kate was like “what’s that for” and I was like “I’ve got to get my fermented lentils somehow Kate!!!”)

title from: Hot Knife by Fiona Apple. This song is extraordinarily good, soft and sharp at the same time with ominous rumbling drums and assertive piano and sparse production and chattering, layered, syncopated harmonies, I love it so much.

I recently watched Passing Strange, a film by Spike Lee of the final performance of the eponymous Broadway show in 2008. It comes across more like a rock concept album than a traditional musical, written and narrated by musician Stew about a young black man’s journey of self-discovery in the late 1970s. The plot is so tightly woven into the music that it’s hard to pick out songs that stand alone but the Act 1 climax Keys/It’s Alright is amazing – it has this big, classic sound and I love when it gives way from the conversational, circular preamble to the massive, long-tail Hey Jude-type finish, I’ve listened to it so many times. The penultimate song, Passing Phase, showcases lead actor Daniel Breaker’s incredible voice as it harmonises with Stew’s and the music just sounds so big and warm and fulsome. If you enjoy stuff like Pink Floyd’s The Wall or 2112 by Rush then you can absolutely handle this.

Quality Seconds, by Orbital. If you’ve ever been like “what does it sound like inside Laura’s brain?” this song pretty much covers it.

Orinocco Flow by Enya. Hear me out, this song is like being serenaded by a friendly cloud, it’s what raindrops put on their sexy playlists, it’s a whale leaping triumphantly into the air in music form, and I was smacked about the head yesterday with the need to dance passionately around the lounge to it like I was in the final scene of a masterfully bittersweet TV series about an unlikeable yet disconcertingly compelling female lead, and let me tell you, Ghost was not impressed, but then I cupped his face and looked into his eyes and sang “sail away sail away sail away” and I think he understood.

Next time: Oh yeah I tried making ice cream again and it was still terrible, and I’m starting to get a bit stressed out by this honestly! Does anyone out there have a really really good recipe for vegan vanilla ice cream?