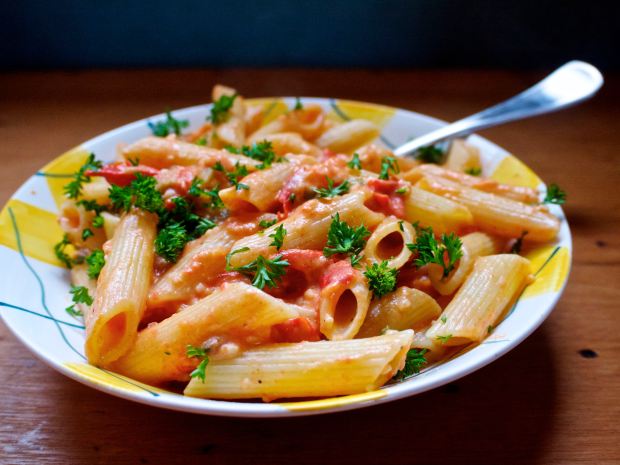 The subject of vodka raises ire within me, frankly I turn into a real killjoy when I talk about it. Then I feel bad and overcompensate, which extrapolates into me just yelling “It’s STUPID! And that’s VALID!” while people rapidly vacate the room. I say this with a former bartender’s hubris, and the absolute humility of someone who – on this very blog! – once sincerely referred to a vodka soda as a “sneeringly dry drink.” In my defence, 2009 was a simpler time and being exposed to fewer ideas meant you could garner unearned braggadocio alarmingly easily.

My issue with vodka? Its purpose is to not exist; a vodka soda might as well just be a soda. There is nothing else it can possibly taste like. If you sincerely want to make your juice alcoholic without the burden of experiencing flavour then that’s fine, go right ahead and add vodka, but I don’t understand the appeal of prestige brands – there is bad vodka, there is competent vodka, and beyond that, there’s not a lot to discern them. My one exception is Zubrowka, but that’s because the bison grass flavouring makes it delicious and actually recognisable, as opposed to the base spirit itself. 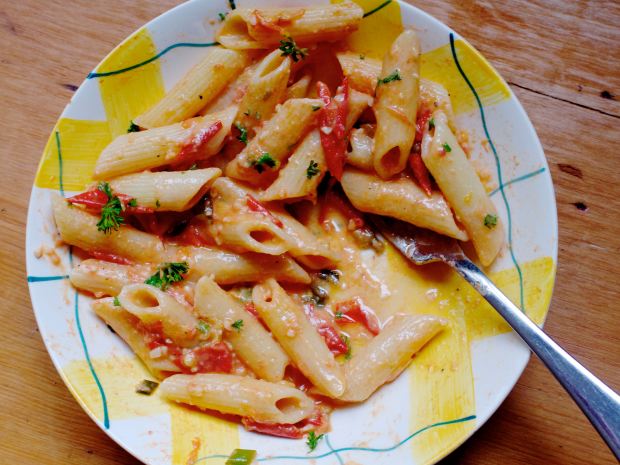 However. Where I begrudgingly – no, blatantly! – acknowledge this otherwise dullard spirit coming into its own, is in the Italian-American dish, Penne Alla Vodka. Everything about this recipe is pleasing: its drawly, Appenine-via-the-Baltics title, the simple joy of tomato sauce spliced with cream, and, yes, the vodka, which provides sinewy, vigorous richness. Pouring vodka into your pasta might suggest novelty, but a splash of white wine in a hot pan will improve any sauce, so switch out a far higher ABV in the form of vodka and you’re rewarded with even more intensity.

My version is vegan, so there’s obviously no cream involved. The richness instead comes from coconut yoghurt – the sort that’s so thick you can genuinely stand your spoon up in it – and a little pasta cooking water. Unlike Penne Alla Vodka, which first emerged – unsurprisingly – in the 1970s, the notion of using the starchy water from your pasta as an emulsifier dates back to the Roman Empire. Don’t leave it out, it somehow thins and silkily thickens the sauce simultaneously. The yoghurt lends tangy luxury, and yeah, you can taste the coconut to a certain extent, but coconut becomes your zero point when you’re vegan for a while. And anyway, its unique mellow sweetness works beautifully with the acidic tomatoes.

More than just the same old pasta with tomatoes you think you know, Penne Alla Vodka has a dishevelled sexiness to it, a dish you could make for someone you’re trying to impress while also doing your best to appear artless and nonchalant. And if you don’t have the titular vodka in your liquor annexe? You can always use instead that most gratifying of flavoured vodkas – gin.

1: Cook the pasta in a large pan of boiling, well-salted water. This should take around twelve minutes, give or take.

2: Halve the tomatoes, cut off the green stalky part, and scoop out the seeds. It doesn’t matter if some are left, and you can just eat them if you’re aghast at the wastefulness, I did. Roughly chop the remaining tomato flesh. Finely chop the spring onion and garlic cloves.

3: Heat two tablespoons olive oil in a saucepan, and cook the onion, garlic and tomato – all together at once – over a medium heat till the tomato has broken down a little. Add salt and pepper to taste, plus a small pinch of sugar. If you’re using crushed garlic from a jar, leave the sugar out.

4: Add the vodka and let the sauce bubble away on medium for another minute, stirring constantly.

5: Once your pasta is nearly tender and cooked, scoop out two tablespoons of the pasta cooking water and mix it into the coconut yoghurt. Stir this into the tomato sauce, and turn up the heat a little to get it bubbling. Stir until the sauce has thickened, then remove from the heat.

6: Fold the cooked, drained pasta into the sauce. Drizzle with more olive oil if you like, and sprinkle over chopped parsley.

Serves 1. If you want to make this for two I’d double the pasta but you can probably just add half the ingredients – like, another two tomatoes and another tablespoon of vodka.

Brand New Love by Sebadoh. Oh, what a song! You think it’s going to be fast and then it’s slow, you think it’s going to be slow and then it’s GINORMOUS. And I will never ever get over how 53 seconds in it sounds exactly like the Defying Gravity coda, like, Stephen Schwartz should be paying them royalties (seriously, please indulge me, the coda starts at 4:28 in Defying Gravity. It’s also, incidentally, my ringtone, and receiving phone calls makes me anxious, which has now made my relationship with this song super weird, although I guess my relationship with it was demonstrably already kind of weird for a grown woman.)

Wimp, by The Zeros, the A-side to their better-known 1976 song Don’t Push Me Around. It’s a great track, but I prefer Wimp’s sludgy, Stooges-y, fulsome brattiness.

Next time: As you can see from the photo above – a small sample! – we are overrun with tomatoes, so they will probably feature.

PS: If you enjoy my writing and wish to support me directly, there’s no better way than behind the claret velvet VIP curtain of my Patreon.