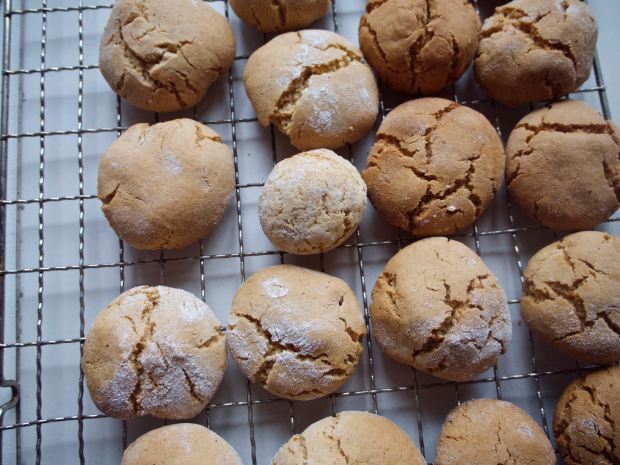 Well, 2021 has shuffled in the back door looking suspiciously like 2020 in a trench coat with a large fake moustache affixed under its nose. And with it, I also shuffle forwards in continuous pursuit of the most palatable way to be all, “here’s a cookie recipe” as the systemic failures and relentless atrocities of the world spiral around us. Truth be told, I don’t know if there is a good way of doing it – and I also don’t believe it’s actually possible to politely withhold politics from the dinner table. What else is there to talk about? Everything’s political! If anything, my hesitancy in alluding to current events is less based in coyness and more based in the fact that there is just SO much happening right now, and all these happenings are jostling for the attention of whatever shreds of my attention span remain after being pan-fried in the savagely hot, high-summer sun which is, I believe, currently located on the roof of my house and not in outer space. (All that being said: a president having two impeachments – while demonstrably imposed far too late to have any real mitigation of risk and harm – is objectively hilarious. Or careless, as Lady Bracknell would have said.)

On New Years Eve my dear friend Charlotte and I watched the sun setting meditatively over the Tasman Sea, and under that sinking sun we listed our intentions and goals for the year – as you can guess, mine include getting an indulgent yet solicitous agent; having a manuscript published to fabulous acclaim; working out how to make a food blog relevant without changing a single thing because I like it as it is; and acquiring a weighted blanket – and I’m speaking them aloud here to give the manifestation process a purposeful bump forwards. We then went home and played Scattergories until 1am when I realised it was suddenly no longer 2020. It was maybe the most lovely new year I’ve ever had, and I hope you, like me, also had a chill and delightful time over the holidays. 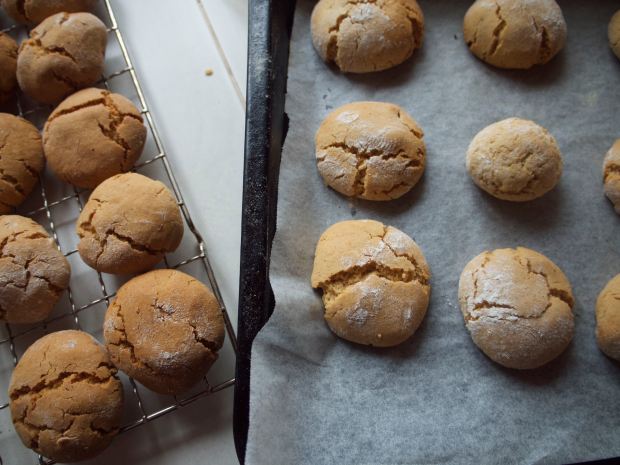 You know and I know that the chocolate chunk cookie rules supreme in hearts and imaginations, but this recipe – which I’ve adapted from Isa Chandra Moskowitz and Terry Hope Romero’s excellent Veganomicon cookbook – is sensational, and extremely worth your attention. The original recipe evokes the flavours of eggnog, but not having ever tried eggnog I can’t speak to its accuracy. Even sans context, these flavours are glorious – the demure warmth of the nutmeg and cinnamon, the buttery elegance of the rum and pecans, the latter offering mellow crunch strewn throughout each chubby golden ball of dough. 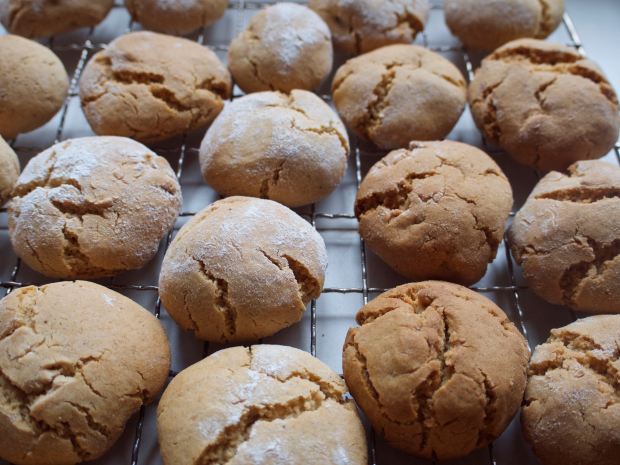 I have to assure you that your cookies won’t turn out cracked and funny like the ones pictured – I’ve made this recipe so many times, but the one occasion where I thought to photograph them, I’d only had self-raising flour on hand and so that affected the way they baked. Your cookies will be smooth-surfaced and beguiling, I promise. I really have made these rum + pecan cookies dozens of times – including a triple batch just before Christmas, prepared in such large quantities for – unsurprisingly – Christmas presents to distribute to the whānau. I also attempted a version while camping last week, “baked” in the large gas-powered frying pan – and they weren’t terrible. Even if you accidentally overcook these they’re still fine, you just really need a cup of tea on hand for significant dunking.

These are grown-up yet comforting and cosy – a truly remarkable cookie. I don’t think I’ve made a batch yet without doubling up the quantities since the first time I tried it.

My favourite cookies – maybe even more than chocolate chunk? Adapted from a recipe in Veganomicon by Isa Chandra Moskowitz and Terry Hope Romero. See notes at the end of the recipe for ingredient substitutes and how to make these alcohol-free.

1: Set your oven to 180C/350F and line a baking sheet (or two, if you have them) with baking paper. Roughly chop the pecans, or – I personally find this much easier – crumble them with your fingers, and set aside.

2: Briskly stir the oil, milk, white and brown sugars, molasses, rum and vanilla together in a mixing bowl, then stir in the pecans. Sieve in the remaining dry ingredients and mix into a thick dough. If it looks too sticky, add a little extra flour (and sometimes I roll each unbaked cookie in a little extra flour before baking just to be safe – hence the dusting of flour you can see on the cookies in the photos.)

3: Roll tablespoons of the dough into balls and place about two inches apart from each other on the baking tray – no need to flatten them or anything. Bake for 10 – 12 minutes, until the pale dough has turned golden. As I’ve noted elsewhere, your cookies probably won’t crack like mine did in this photo – I only had self-raising flour when I made this batch and I think it affected them a little.

4: Carefully transfer the cookies to a cooling rack using a lifter/flipper tool and continue rolling and baking the remaining dough. If you are baking two trays of cookies at a time you may need to give the tray on the bottom an extra minute or two.

No 1 Fan by Majesty Crush. This song, from the very underground early 90s shoegazey band Majesty Crush, is just startlingly gorgeous. It makes you feel exhilarated but in a really sad way, you know?

Nobody’s Side, sung by Broadway’s Julia Murney in the 2003 concert version of the musical Chess – this is the definitive interpretation of the song. The cerebral quality Murney brings to every role, the Capital-A Acting that she does, her unparalleled vibrato absolutely pinging, that note she hits precisely three minutes in which is so stratospheric I couldn’t even tell you what it is (a high J perhaps? An N major?) I could pummel whoever decided to cut away from her expressive face at that moment to do a wide shot, and I would gladly hand over a non-essential organ for a high-quality cast recording of this show – till that blessed day comes, a grainy YouTube video it is.

Next time: I believe it’s that time of year where, despite professing to not be wild about soup, the only thing I can face eating in this stifling heat is…chilled soup.