I never feel more normal than when I’m quietly, as if by automatism, trying out a recipe that appeared in my head. “Normal” has twofold meaning here, in that I feel most calmly myself when I’m dithering away in the kitchen, and also I imagine this must be what it feels like for other people when they achieve everyday tasks the moment they arise. Tasks like using the phone to make an innocuous appointment, or tidying a living space, or, more broadly, maintaining one liveable salary instead of corralling a skittish herd of seventeen different tiny one-off payments every month.

Not that any such notions troubled me when I blissfully – with head empty, no thoughts, only preserves – made this Rhubarb, Raspberry, and Cardamom Jam on Saturday morning five minutes after the idea appeared to me. It was only once the jar lids popped under the pressure of the heat rising from the boiled fruit that things got existential, and it hasn’t quite left me, but at least I have delicious jam to eat. 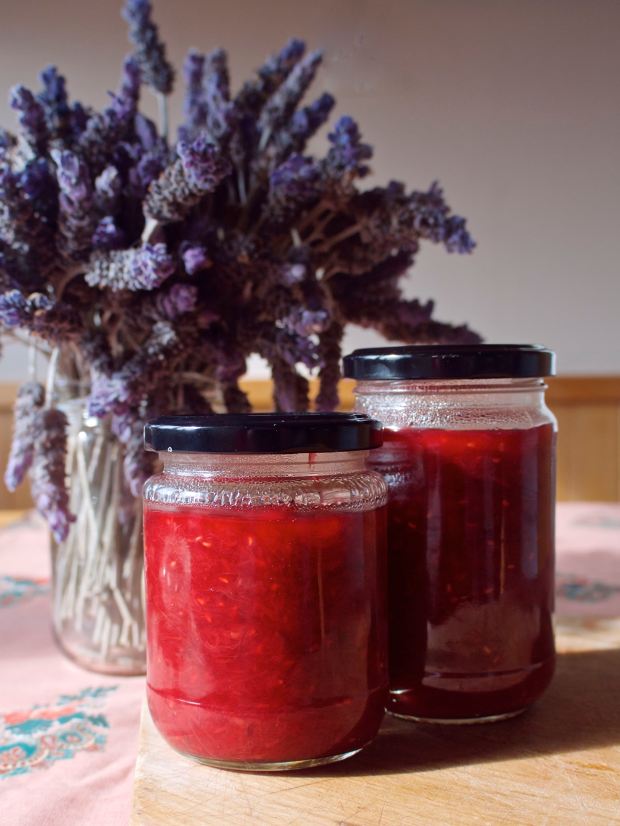 If you don’t regard yourself as the jam-making type, this could be the recipe for you. It’s small-batch, meaning you don’t have the stress of committing to vats and vats of jam; (although this was purely informed by the amount of rhubarb in the garden and raspberries in the freezer; had I more fruit, I would’ve made more jam.) It’s soft-set – almost like a compote, as much ready to be spooned over ice cream or yoghurt as it is gunning for your next piece of toast – so you don’t have to concern yourself with whether it’s gelling adequately. And it’s a startling and glamorous shade of hot pink which surely is a point in its favour – when it comes down to it, I myself am barely the jam-making type but I remain easily swayed by aesthetics, if anything I’m constantly on the eager look-out for an aesthetic to be swayed by.

♬ Somewhere Over The Rainbow – Beyond the Rain – Laura Lee Lovely

This is probably important too: the jam is sweet, but balanced stridently by the sour wince of rhubarb. The raspberries also pack significant tang for their buck, and there’s a further squeeze of lemon juice, partly for added pectin, partly to make the sugar really earn its place. Cardamom has a lemony, gingery, musky flavour and even in its small quantity, it makes these qualities felt and lends an air of elegance to the otherwise fairly brassy jam. I mean brassy as in vibe, not flavour, in case you were suddenly worried about encountering ‘notes of door handle’ or something. This recipe makes enough for two medium jars with a little leftover to be spread immediately on toast – what is that, if not an achievement of the highest order?

This soft-set small-batch jam is easy to make, delicious, and a charming shade of bright pink. Makes around 400-500ml – I filled two medium-sized jars and ate the rest spread on toast. Recipe by myself.

1: Cut the rhubarb into 1-inch pieces and place them in a bowl with the raspberries. Use a vegetable peeler to remove as many viable strips of peel as you can from the lemon, and add this to the bowl, then cut the lemon in half and squeeze its juice into the bowl.

2: Tip the sugar into the bowl and stir it into the fruit. Press against the two cardamom pods with the flat side of a knife or the base of a jar until they’ve just split, and add them to the bowl too. Cover the bowl and leave it to sit on the bench for about an hour, by which point some of the sugar should have dissolved and drawn out the juice from the fruit.

3: While this is happening, why take the opportunity to sterilise your jars? Place the lids in a small bowl and cover them with boiling water, and place your clean jars into a cold oven, turn it to 100C/200F, and heat them for about fifteen minutes. The jars need to be hot when the jam goes in, so leave this step till towards the end of the steeping time.

4: Scrape every last bit of fruit and sugar and newly-formed syrup from the bowl into a saucepan.  Bring to the boil, stirring regularly, and then lower the heat slightly and let it simmer briskly – still stirring frequently, as keeping it moving will stop it sticking to the pan and burning – for another seven to ten minutes until the fruit has completely collapsed and the mixture has thickened and reduced. Remove the cardamom pods and lemon peel with a pair of tongs, or live dangerously and leave them in (I forgot about them until they were already in the jar but it’s all in how you frame it.)

Keep the jam in the fridge once opened. 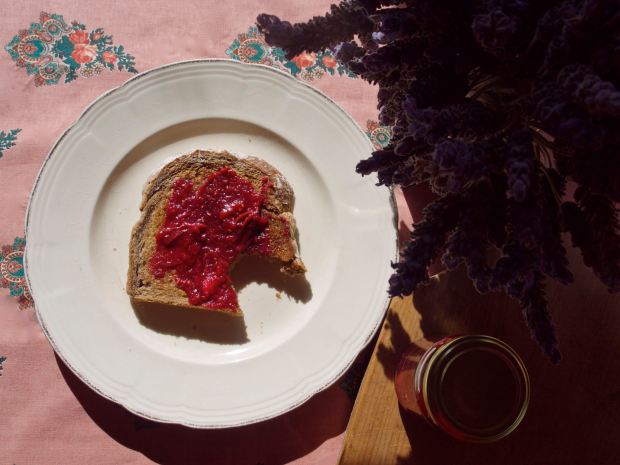 Map Ref. 41°N 93°W by Wire. If a title is going to be that annoying to type out it better be a good song; fortunately this very much is.

So Little Time by Micki Grant, from the 1972 musical revue Don’t Bother Me, I Can’t Cope – the first Broadway show directed by a Black woman (Vinnette Caroll) and to have its music and lyrics written by a Black woman (Grant.) This song has such a warm, poignant vibe – like it could be the theme tune to a TV show that you’d watch when you were sick and didn’t go into school and got to doze on the couch all day.

Ruby by Ali Farka Touré and Toumani Diabaté from their 2010 album Ali and Toumani, but I’ve linked the whole thing so you can just swim right into its beauty – if you want music that’ll make you feel safe, yet important, yet inspired, yet also like you’re drifting gently to sleep under a weighted blanket, then, by all means, click through.