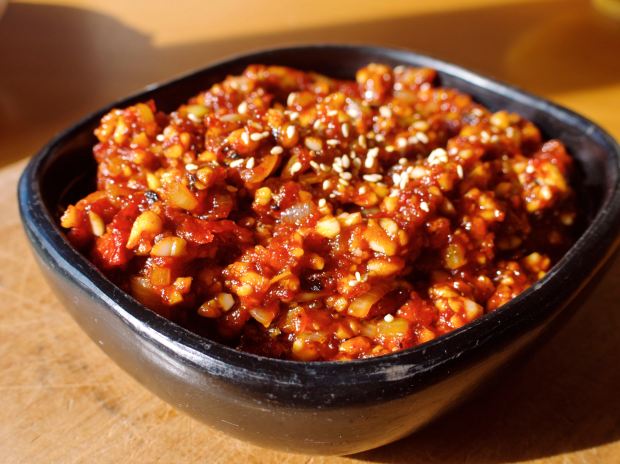 I’ve been vegan for about three years now, and comfortably so, but I’m only human and despite my claims, it is not just white chocolate that makes me occasionally question my every last firmly-held conviction. It’s Folu’s Unsnackable newsletter, it’s the memory of a filet o’fish – not that I think it would be hard to make a vegan dupe but a recipe for those pillow-tender steamed buns as yet eludes me – and it’s all the Korean food creators that I follow on TikTok. This recipe for gochujang bokkeum – a fried gochujang sauce with onions and beef – by Johnny Kyung-Hwo Sheldrick algorithmed its way onto my phone, and it looked so delicious, and I was sure I could make it vegan easily enough without squandering the vibe of the original recipe. (More so than the person who commented “is it vegan” to which Johnny gamely and politely replied, “without the beef it is”, such is the state of critical thinking these days.) 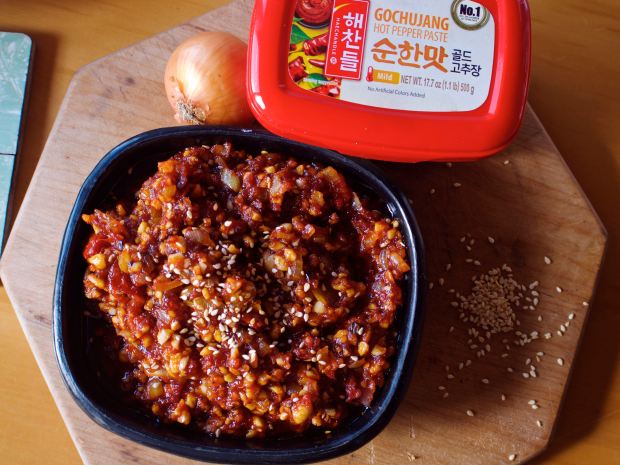 Far be it from me to suggest that the food of a cuisine that isn’t mine needs me to meddle in it but as it stands, I don’t eat beef but I wanted to eat this. I’m delighted with my variation and I’m delighted that I found the original recipes that inspired it; I wouldn’t have come up with this without them. Rather than use a fake meat as a replacement I decided a rubbly mixture of blended up peanuts and sun-dried tomatoes would be ideal, and they were – the peanuts give texture, protein and nutty mildness; the sun-dried tomatoes add concentrated, near-meaty dark red savoury flavour and stickiness.

So far this gochujang bokkeum has been delicious on cold noodles, on hot noodles, and mixed into stir-fried vegetables with fake chicken; I know in my near future there’ll be a big spoonful of this on a bowl of rice with fried mushrooms, and I feel like it would work beautifully with a creamy texture as well – like these coconut chilli tofu noodles.

All the peanuts and tomatoes spread that chilli heat out a little, but eating this is still a vigorous experience, and the gochujang, a Korean fermented chilli paste, is definitely pretty fiery. But it’s not only hot. It’s got these shadowy layers of flavour and depth and, as Nigella Lawson said in her book Kitchen, an “almost liquorice intensity”, a description that dances in my mind whenever I eat it. Besides, heat tolerance is a moving target and the only way to get used to it is to eat more. I don’t consider myself even close to being able to handle a lot of chilli heat and yet I keep sneaking spoonfuls of this; after a while your tastebuds do adjust – eventually you’ll be spooning it onto your breakfast cereal. 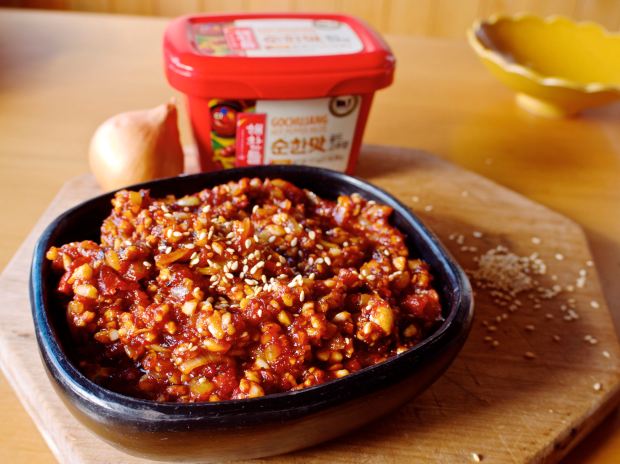 This Korean fried chilli sauce is seriously delicious and versatile. I’ve replaced the usual meat with peanuts and sun-dried tomatoes, but the star ingredient is, of course, gochujang, a Korean fermented chilli paste. My vegan version is both inspired by and based on this recipe at Racheerachh Eats and this TikTok by Johnny Kyung-Hwo Sheldrick.

1: Finely dice the onion and roughly chop the garlic. Place the peanuts and tomatoes in a food processor and blend them into a chunky paste; the peanuts should be in small pieces but not in any danger of turning into peanut butter.

2: Heat the vegetable oil in a heavy frying pan and gently fry the onions and garlic till they’re softened. Spatula in your peanut and tomato mixture and fry for another five minutes, stirring often – don’t expect it to brown or change appearance considerably – then stir in the sugar and soy sauce and keep stirring till the sugar has melted into everything.

3: Add the gochujang to the pan and continue to fry and stir for another couple of minutes, it will be a fantastic dark red shade and quite thick. Remove from the heat, stir in the sesame oil and sesame seeds, and transfer to an airtight container or clean jar. Store in the fridge. 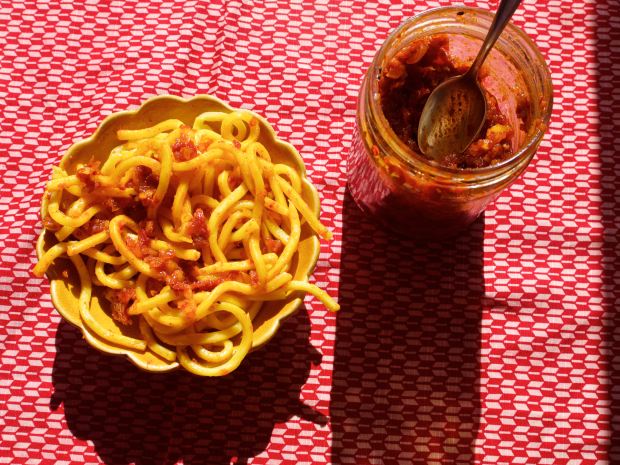 Mijn Droom [I Dreamed a Dream] by Pia Douwes from the 1991 original Dutch production of Les Miserables. I love finding the people in non-English speaking countries who are the go-to for theatre roles (like German powerhouse Willemijn Verkaik) and though I’ve heard of Pia Douwes I’ve never investigated her singing before, it was after watching a TikTok by BroadwayBob that I simply had to. She has this gutsy yet vulnerable voice that is made for the stage; I also highly recommend her Sally Bowles in the Dutch language Cabaret, it is, as you can imagine, quite powerful.

Legend of a Cowgirl by Imani Coppola, it’s the most 1997 sound imaginable and yet still so fresh and arresting and irrepressible and she should’ve been a megastar off the back of it.

It Hurts Me Too by Karen Dalton, one of those songs and voices that just makes you tearful the second you hear it. Good crying, not crying-crying, but after a while who can even tell!