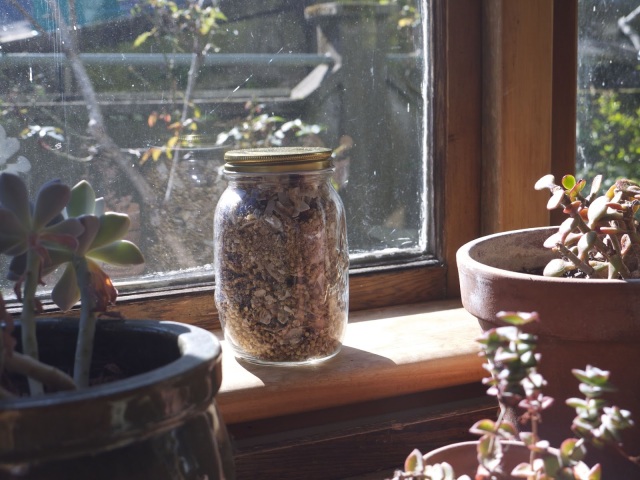 In testament either to how good this granola is, or to what a monumental grub I am – why not both? – the last time I ate this granola was yesterday, in a charming tableau: I was on my bed, face smeared with organic coconut oil (it felt like a vaguely beneficial thing to do) and about to take a nap. I was, however, ravenously hungry. The jar of granola was the only thing I had to eat and it also happened to be on the floor by the bed. I sighed – so dustily unsatisfying, why couldn’t I have a jar of cheeseburgers by my bed instead – and listlessly opened the jar to paw myself out a handful.

One chewy, buckwheat-rich mouthful in and I was all, oh that’s right, I make amazing granola like it’s no big deal. Verily, I began chugging it straight from the jar, which obviously-in-hindsight ended up with granola dust tipping out heavily onto my face and sticking to the coconut oil that I was thickly daubed in. This…this did not stop me. I kept eating it, while it was also stuck to my face, and like, I did shower, but it was quite some time later. If this visual doesn’t impel you to make and eat this granola then frankly I understand completely.

This first time I ate it, I was catsitting for a good friend, on their wooden floor in a sunbeam like I myself were also a cat, eating it with almond milk and coconut butter, and reverently watching Beyonce’s new visual album and masterpiece, Lemonade.

My takes on Lemonade are absolutely not required, but I will just say that it’s one of the more exciting and beautiful and heartstoppingly good things I have ever witnessed, and whatever your thoughts hitherto on Beyonce and whether the music she makes is your kind of thing, you should 100% watch this. (Seriously: if you can sit through The Wall, you can easily make some time for this.) I was utterly transfixed.

This granola is largely comprised of buckwheat, which is super good for you and majorly gluten-free, despite the use of wheat in its name. I find this hilariously cavalier. Like what if a dog was all “I’m a horse. I’m not actually a horse, it’s just the name of my species. Call me a horse!” That was an appallingly ineffectual analogy but I’m very tired so that allows me to get away with such things.)

But anyway – buckwheat has a pleasing crunch to it and that same kind of non-committal I-am-your-breakfast flavour that oats have, making it an ideal background to whichever direction you’d like to take your granola in. I decided to have coconut be a major player, as if it were as important as the buckwheat itself rather than just a mixed-in secondary thing, if that makes sense. I’d been given some dried cranberries and so it seemed a reasonable idea to add them to it, and they work beautifully – little bursts of sour-sweet liveliness amongst all the mellow coconut. This is very, very easy to make and gives you a great big jarful. To make the coconut butter that I had sprinkled on top of it, just place two cups of toasted coconut chips in the food processor and blitz them for ages and ages until you’re scared that your processor will blow up, at which point let it cool down, and continue on until you’ve got what looks like peanut butter, but tastes like white chocolate. I let it firm up and harden, which made it even more like chocolate. It was a very good time.

Put the buckwheat in a large bowl or measuring jug and cover with water. Leave to sit for about an hour, by which point the grains should have swollen up and absorbed a lot of the water (and feel free to top it up if need be.)

Set your oven to 130 C. Drain and rinse the buckwheat in a sieve, then spread fairly evenly in a thin layer on a baking tray lined with baking paper. Pop the tray in the oven and leave it for about half an hour. Put everything else except the cranberries and chia seeds onto the tray, turn the oven off and let it toast slightly in the remaining heat of the oven (or you can just leave it there cooking for another 20 mins, this is just my small attempt at being conscious of power usage and stuff.)

Stir in the cranberries and chia seeds if using, add more of anything that you feel like it needs more of, and then tip into a large jar. 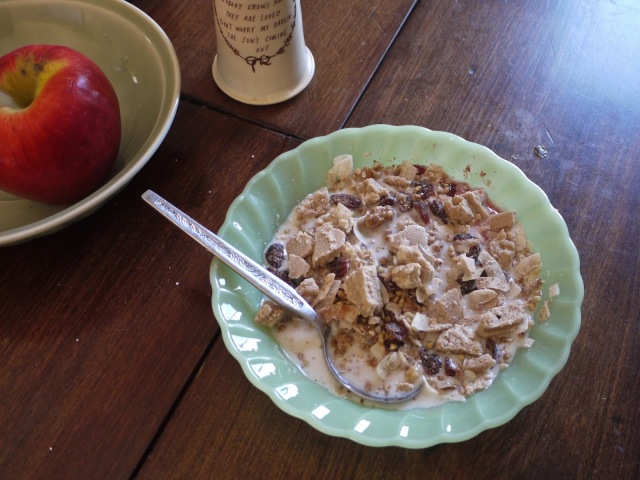 This is the cat I got to hang out with. He’s the same one I was looking after over Christmas and he is a character. I was incredibly grateful however that this time he did not bring me any offerings of rat.

look at this snug little piglet 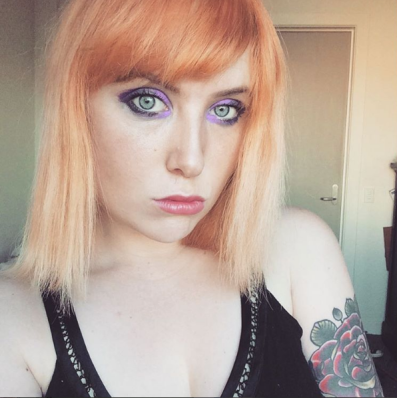 Oh yeah, and I bleached my hair the other day and instead of becoming some kind of platinum goddess it turned peach, for the sake of my poor hair I’ve decided to roll with it for a while though. No less than three separate people have been all “Debbie Harry!” at me though so I am now delighted with it.
title from: What I Am, by Emma Bunton, aka Baby Spice. It’s soooo nineeetieeeeees and so great.
music lately
Cream, Prince. Like many, I was massively saddened by his recent death. This song hasn’t got any particular significance (I do remember dancing to it in a club in Greece one time I guess) but ugh it’s brilliant. So brilliant.
LEMONADE. Find it.
next time: I made amazing fudge. AMAZING. You can make it too.

8 thoughts on “philosophy is the talk on a cereal box”