(It’s not pretty, I grant you, but I was like “maybe a lil bow will distract”)

I had a dream about this corn and chilli relish and then upon reflection realised that it already existed more or less in a recipe from Nigella Lawson’s Christmas cookbook, aptly named Nigella Christmas. All I’ve done to her recipe is halve the quantities, add some red chilli, use date syrup instead of honey (I am kind of on the fence on honey consumption vis a vis veganism but for simplicity decided to not use it here) and used ground cumin instead of celery salt because I didn’t have the latter and felt like the former, while different in flavour, brought some of the same energy.

This doesn’t come out like the chow chow you might see in the supermarket, it’s not thick and gluey but more like … bits of vegetable submerged in vinegar, neither of which sound massively appealing but my god! This stuff is addictive, I haven’t actually even used it in anything yet but I’ve already finished off an entire jar just by standing at the open fridge, eating it by the spoonful. Fortunately it makes two jars full.

As I said, you could ostensibly just go to the supermarket and buy a jar of this or something similar but there’s something in the act of making a recipe that then goes into a jar, preserving and putting away, which pleases. This is based on – as I’ve said before – both the sheer resourcefulness of it and the fact that you’re investing in your own future existence and, hopefully, happiness.

The finished result isn’t particularly attractive but it tastes incredible – the sweet crunch of corn and capsicum against the bursts of burn from the chilli and the sinus-scritching mustard, the sour-sweet sugary vinegar balanced by all the salt I poured in (this can handle a LOT of salt.) It’s also so easy to make, and indeed, you could totally make a ton more if you go with Nigella’s original proportions.

As for what to do with it other than eat it by the spoonful; I think it would be ideal piled into a baked potato, layered on top of a burger, or stirred into a pile of peppery crunchy rocket and iceberg leaves.

Have two 300ml glass jars at the ready, and sterilise them if you like, can be bothered.

Mix all the vegetables together in a good-sized bowl. Wash your hands thoroughly and be careful to not touch your eyes after handling the chilli or it’ll sting like hell.

Bring the vinegar, syrup, sugar, cumin, salt, and mustard to the boil in a saucepan and allow to bubble away for about five minutes, stirring occasionally. It might bubble up and look like it’s about to overflow, in which case remove it from the heat and give it a good stir or – my usual trick – drop an ice cube into it.

At this point, pour the syrup over the corn mixture and give it a stir. Carefully divide between the two jars – the easiest way is to spoon the corn out of the syrup into the jars followed by the remaining syrup, which should be completely submerging all the vegetables. Screw the lids on and refrigerate. This tastes better the longer you leave it and will last for around a month in the fridge after opening. 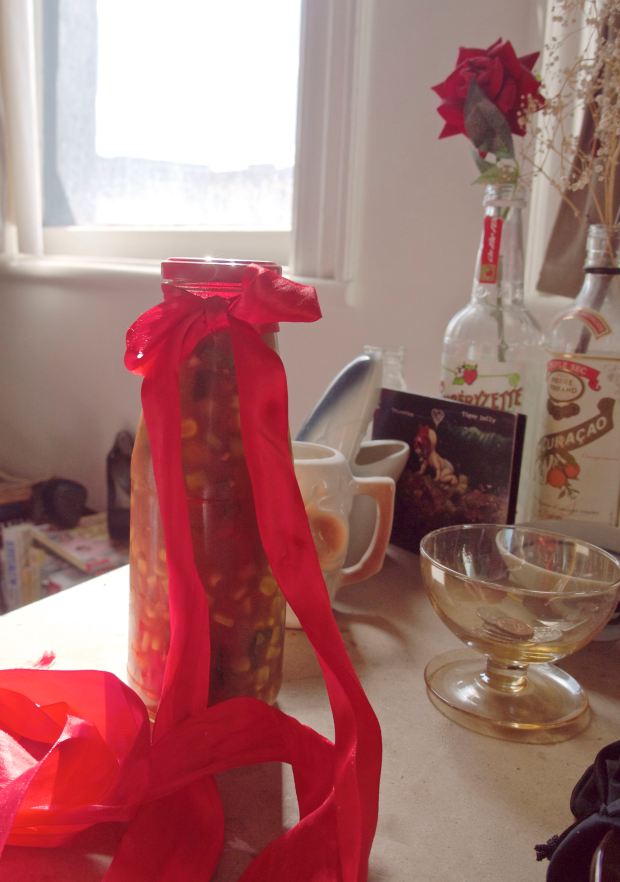 (And then I was like okay what about a new location)

I’m not sure if this is a confession that’s going to elicit gasps of muffled horror or conspiratorial acknowledgement that I’m not alone in this (as long as it’s not greeted with indifference tbh) but any time a recipe is all “sterilise your jars thoroughly” I’m like “you will be FORTUNATE if I give it a rinse of the most CURSORY nature in soapy LUKEWARM water”, and you have my full permission to do the same. If the jar smells too strongly of what it previously contained (tomato in particular seems to linger) a quick slosh of water and vinegar or lemon juice seems to do the trick.

I was able to go to a bunch of LitCrawl (a local literary festival) events this weekend and left feeling replete with inspiration and goodwill towards all those who shift words from their brain onto some more tangible surface. And I met so many nice people! Some were even like “oh you’re Hungry and Frozen” and I was like yes! These words are sweeter than any writing I’ve heard this entire festival! But, to that end, after seeing him perform his poetry on Friday night I read the entirety of Kaveh Akbar’s book Calling a Wolf A Wolf; it’s very beautiful and he has this incredible way of saying things with a sense of authority where they almost sound idiomatic but you’ve also never heard those words in that order before. Even his titles are blissful – My Kingdom for a Murmur of Fanfare. I recommend it sincerely. Positively frothing with inspiration and spurred on with the lazy insolence of tramadol and having watched a movie (Outlaw King) that I genuinely the entire time thought was the pilot episode of a Game of Thrones style prestige TV show because prestige TV has melted my brain; I myself put pen to paper to write a poem: for rough context, imagine a Game of Thrones style prestige TV situation but…with…pigs. All present found it highly amusing, I assume without verification.

A pig shall rise

There is no older story than this
A cloven hoof pierces the thick mud
A squeal like a crack racing up a mirror
The air smells, sinister and ominous
And like ham
A tail curls, small but purposeful
Narrow eyes and soft ears, gently crushed by a heavy crown
Smear your face in bacon fat and march onwards into hell
It is better to live free and die at the hoof
Than to never know freedom at all
A pig shall rise

Thanks LitCrawl! (what’s that faint noise in the distance? Is it LitCrawl frantically gesturing that they don’t want to be considered even tangentially responsible for the birth of, or by any means associated with, this new work?)

title from: C’mon Billy by PJ Harvey. So snarly!

Tadpoles, Poemme The sound of a petal floating in water, more or less, and so chill you could just scream.

IRM, Charlotte Gainsbourg. The sound of a lightbulb flickering and sputtering, more or less.

I Hate Danger, Bikini Kill. For someone who won’t stop talking I have a very short attention span most of the time and I do enjoy a song that panders to this.

Wedding, Smog. “I’m gonna be so drunk at your wedding.” Hypnotic.

Next time: I’ve been thinking up a bunch of recipes that could potentially sit proudly on the table at Christmas dinner and plan to run them all by you first.

If you wish to receive this blog post newsletter style on Sunday-ish evening-ish every week do consider signing up here.

2 thoughts on “the corn was golden, we lay in it for days”