Look at this beautiful photo of this terrible ice cream

Though we are as a society perhaps too hysterical about many things up to and including the internet, the influence of said internet can nevertheless have its undeniably shady side: maybe your toddler wants lip filler injections, maybe you lie awake fretting about how you’re not doing yoga in Prague like everyone else, maybe you read alt-right blogs. Or maybe you see a photo on Instagram that inspires you to try making ice cream out of canned beans. Which I did try. Three times. 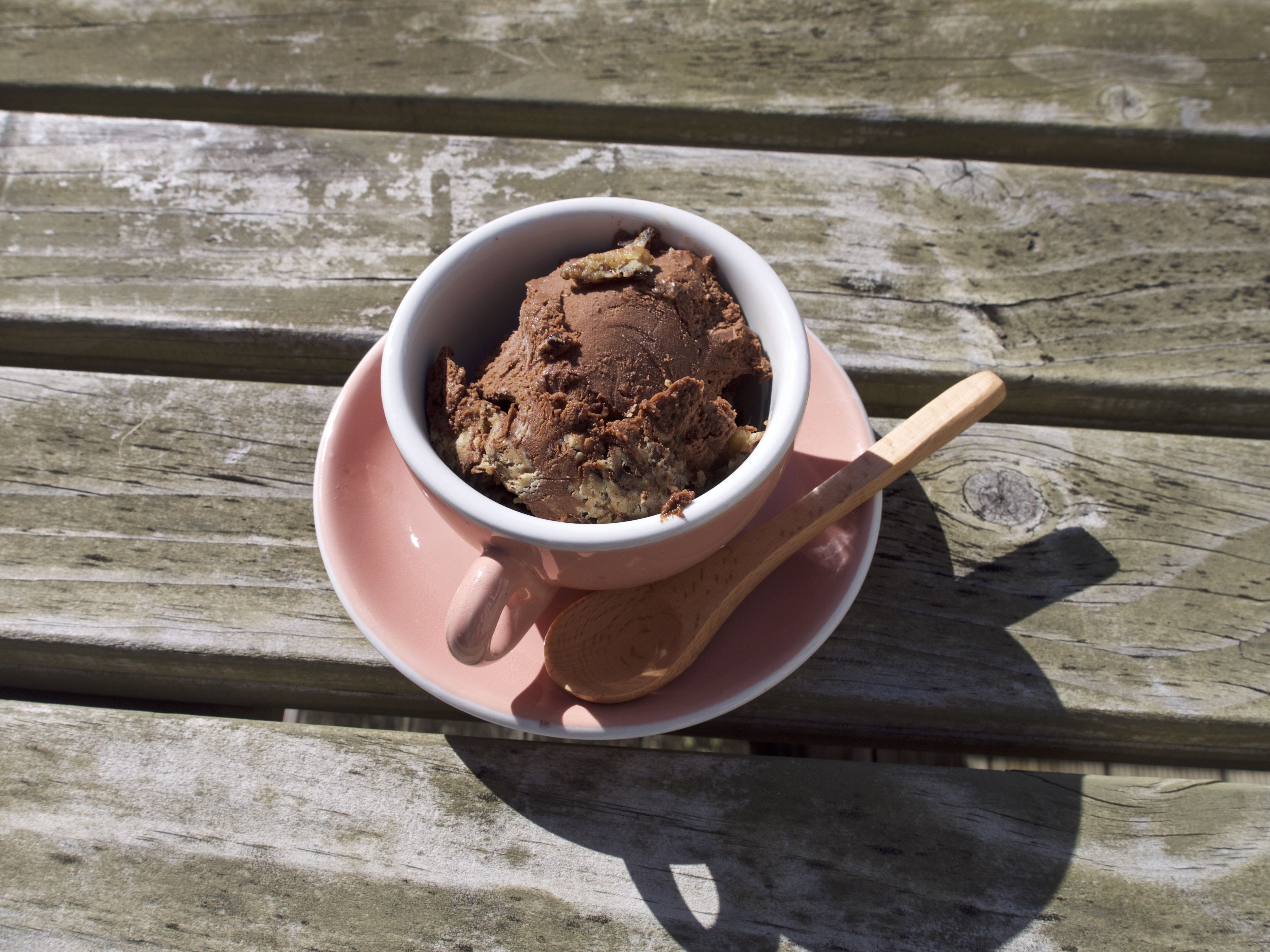 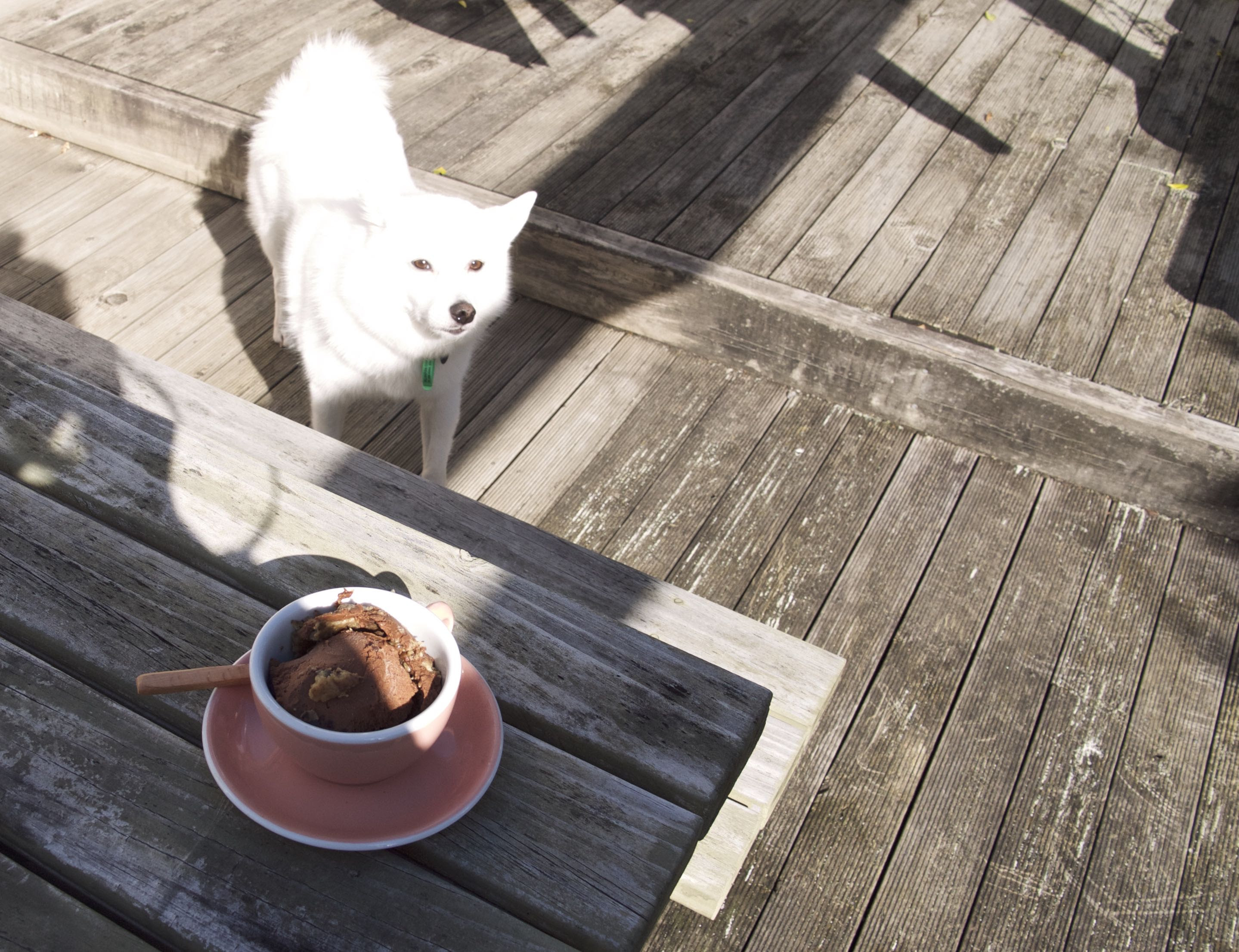 Your suspicion serves you well, Ghost

So what went wrong? The theory of Occam’s Razor would suggest that my first misstep was TRYING TO MAKE ICE CREAM OUT OF CANNED BEANS but like, there could be more to it than that. The first batch, as I recounted at length last week, was based on chickpeas and tasted somewhat affrontingly yet not surprisingly and ultimately overwhelmingly like chickpeas. Fine! I said, in the manner of Lisa in the movie Fame changing her major to acting and pretending she never wanted to dance: I’ll try a different bean! Butterbeans are mellower and creamier, their very name has a soothingly evocative sound, and I even tried adding melted dark chocolate to really mask the flavour. First, I blitzed the drained beans in a high-speed blender till they were velvety smooth, then I added oil and sugar and stirred them into the brine that I’d drained from the can and whisked into frothy peaks with sugar and cream of tarter, because – fun fact – the liquid from any canned beans will act like egg whites if you whisk them with enough intent. Stirring in the chocolate made the mixture thicken rapidly and resemble chocolate mousse but it seemed promising. I then made some cookie dough and stirred it in and bunged the lot into the freezer and waited six to eight hours. 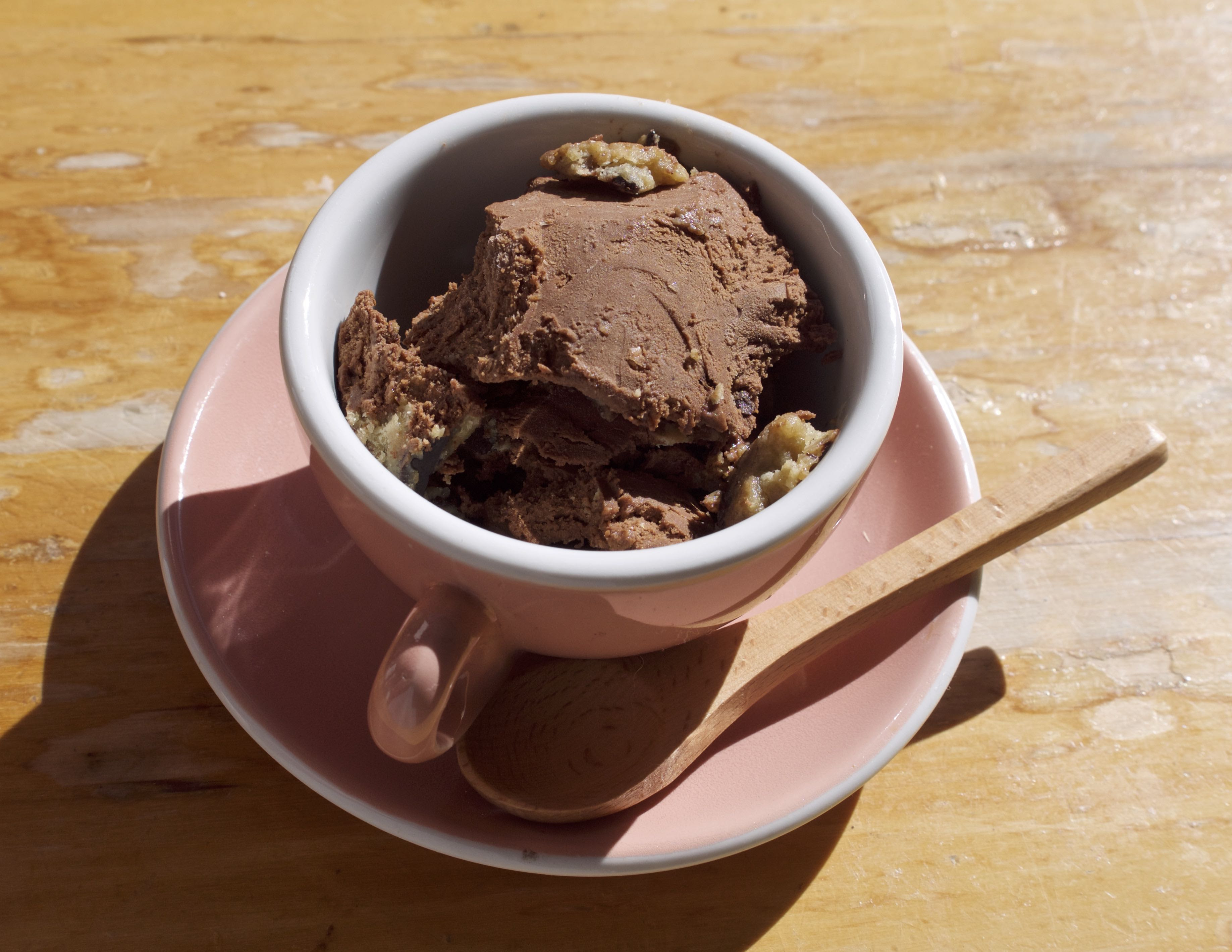 It looked great, and so I scooped some into a dusky pink coffee cup and took photos of it in pleasing tableaux around the house and then finally tasted it. It was…strange? Really sweet and rich and definitely chocolatey but not at all like ice cream and while I didn’t think you could taste the beans it still somehow was a little stressfully granular, as though you could sense with your tastebuds that it was guiltily hiding something. I gave some to Kate, and I was all “it doesn’t even taste like beans!” and she quietly replied “yes…it does.”

Further taste tests solidified my opinion that it wasn’t bad, just a little troubling, which when it comes to food…is bad. I deduced scientifically that the thing making this frozen dessert taste rueful and self-deprecating was a lack of liquid – it seemed more like cold cake icing than icy, creamy, uh, ice cream. 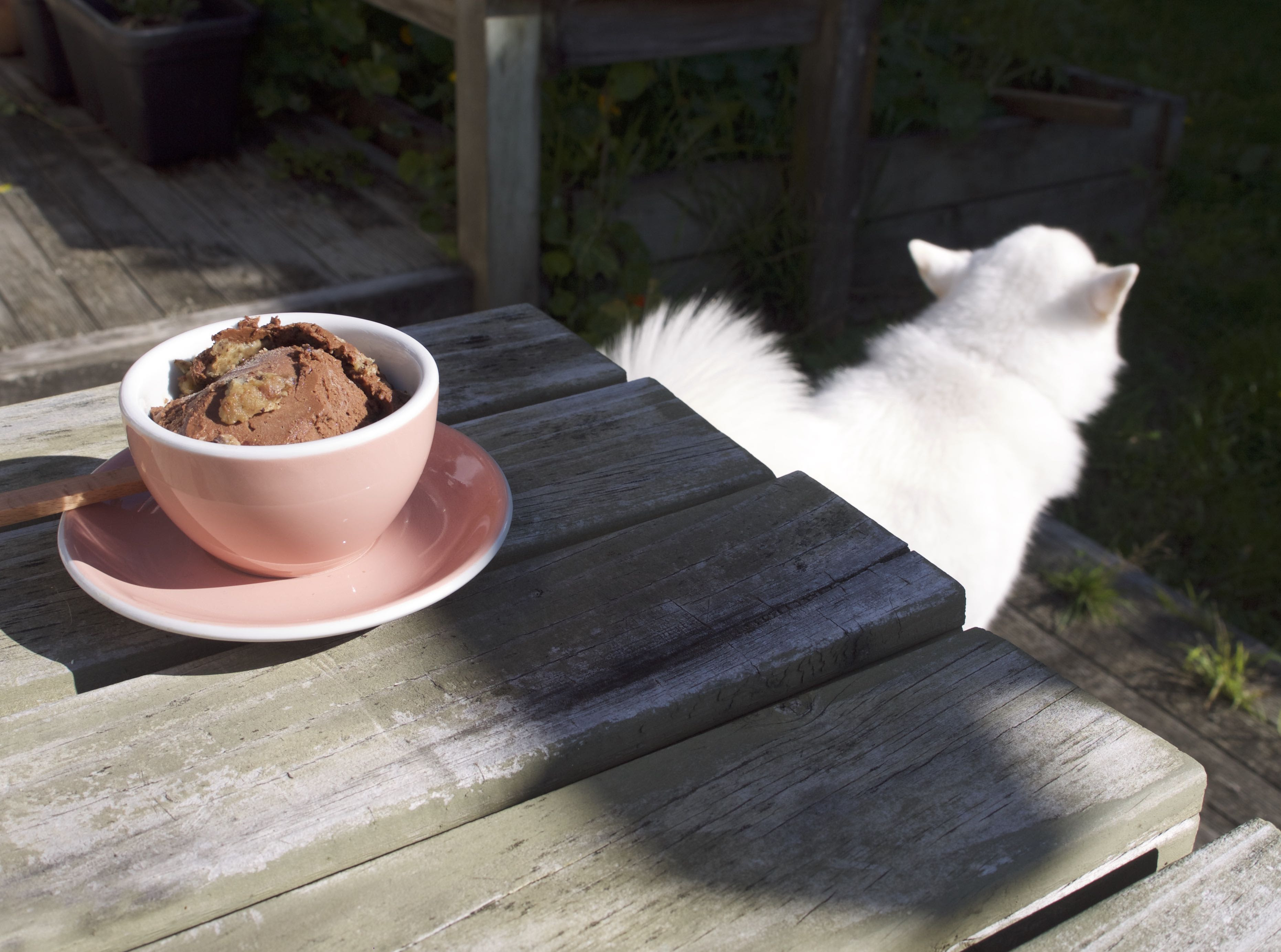 So I resolutely ploughed ahead with a third batch: this time with no chocolate or cookie dough to distract from the matter at hand, just a simple vanilla ice cream, made using the same divide-and-conquer method of blending the beans with sugar and oil and folding them into their own whisked bean brine with plenty of vanilla essence and a full 250ml of oat milk. The mixture looked creamily promising and when I took it out of the freezer six to eight hours later and ran my spoon across its surface it looked winningly exactly like ice cream: thick and frosty and scoop-able and creamy and I tasted it and oh my god it tasted like beans the entire flavour profile was beans it was just beans it somehow tasted more like beans than the original untouched beans in the can, just BEANS BEANS BEANS and I was like…well, no one can say I didn’t try. 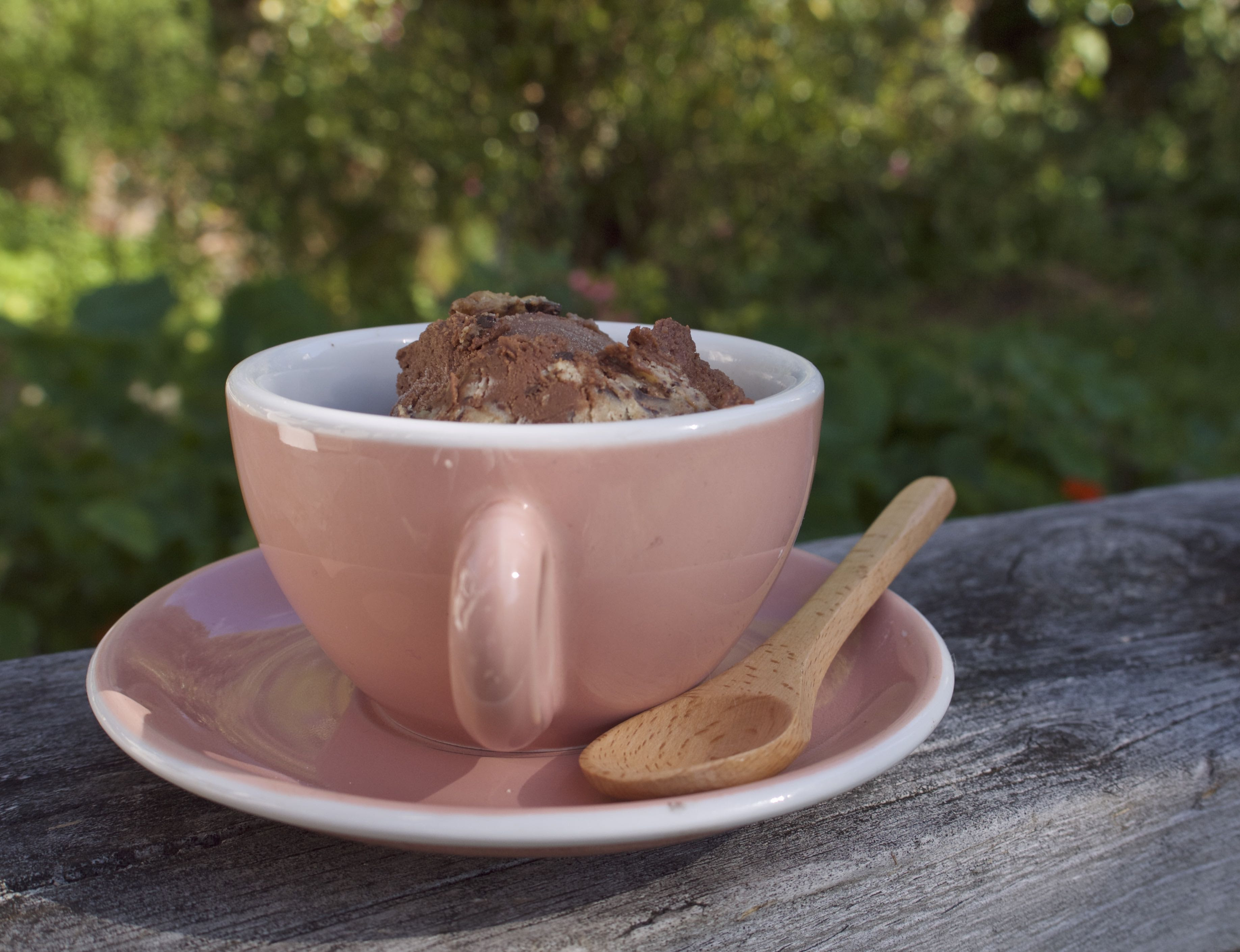 This is not to say that there aren’t successful recipes out there for bean-based ice cream. There undoubtedly are, and they probably involve large commercial kitchens and slightly more high-tech ingredients and knowledge than I have. There just definitely aren’t successful recipes for bean-based ice cream sitting in Kate and Jason’s freezer right now.

It’s my birthday on Wednesday 17th and I’ll be turning 33. As I noted, somewhat aghast, to my friend Charlotte who herself turned 33 last week, this means we’re no longer in the age bracket where Paul Giamatti would fall in love with us in an indie movie, we’re instead becoming the age of his unwhimsical pursed-lipped wife, probably played by Maggie Gyllenhaal or Kristin Wiig, that he cheats on in order to discover himself (next stop: you inevitably become Paul Giamatti’s mother, a role which will be played by like, Laura Linney, or Maggie Gyllenhaal in precisely two years time. If she’s lucky.) I’m having a small dinner party the day after my birthday where I’m going to be cooking for a select group of people that I really like, and I am pleased to note that neither Paul Giamatti’s opinion of me nor my failed attempts at this one particular varietal of ice cream are holding me back from feeling anything but excited and confident, I am delightedly devising a menu and can’t wait to feed everyone and nevertheless, absolutely none of it will involve ice cream. I think it’s just for the best.

(PS: I’M FINE about all this obviously but if you need reassuring that I can make ice cream, I recommend reading my recent-ish posts for Rosé Raspberry Ripple Ice Cream or Black Salted Caramel Ripple Ice Cream.)

PS should you be all like Laura! How can I mark the occasion of your birthday? I would say hey! You don’t have to do that at all! And now that I’ve got that fake demurring out of the way, I would say you can become a Patreon patron and directly support my writing! And in return you can receive treats in the form of content written exclusively for you! So it’s like a birthday present for yourself in the long run. But mostly for me.

title from: Heaven Or Las Vegas by Cocteau Twins. Elizabeth Fraser’s voice! It’s the sound of moonlight, the sound of water hitting the point of freezing, it’s undoubtedly what Handel was listening to when he wrote the Hallelujah Chorus.

I watched the fourth and final season of musical comedy Crazy Ex-Girlfriend and like, I’ve watched a LOT of TV shows about people with mental health issues and I’ve never seen depictions as accurate as this, let alone with regular Stephen Sondheim references. Parody music can be like someone telling you about their dream, like, I get why you’re excited, but it’s not REAL, but these songs are REAL skilful in their execution and the fact that co-creator and star Rachel Bloom wrote like 150 of them over the show’s series is genuinely incredible. I particularly loved Don’t Be A Lawyer from this season which cleverly jacks New Jack Swing and the earlier, surprisingly incisive Love Kernels (“how do I know he really loves me? I guess the only way to prove it…is with abstract symbolism”) and its spiritual successor, Without Love You Can Save The World which matches its faux-hippie-folk sensibility with choreography right out of Twyla Tharp’s playbook. This show is kind of gruelling even if you’re into musical stuff but it’s so rewarding.

One Beat, Sleater-Kinney. The drumbeat and the overlapping voices in the chorus are so satisfying.

Another World, Richard Hell and the Voidoids. The verses are all slumping and shambling and then the chorus is so simple and sweet and then it ends sliding all over the place again, I just love him so much!

Next time: As I said I’m going to be cooking a birthday feast this week, so my next post will likely feature recipes from that night. Actual recipes!

5 thoughts on “hang on to this, stay and stay and fail and fail”