When I was a kid, it felt like every day from December 1 onwards was basically Christmas Eve. As an adult working in the hospitality industry it’s like, literally every day is just another shift to clock on and I might start idly organising Christmas-related things at 11pm on the 23rd if I’m feeling sprightly. This year I’m instead occupying the odd world of freelancing, where you’re always working but it never looks like it, where no thought can go unexamined but for the question, “is this content?” Working for yourself means no Christmas parties and a very biased HR department, but on the upside, most of the toil can be done in track pants on the couch. Nevertheless even with all this sitting down I still find myself astonished at the haste with which this month has moved. 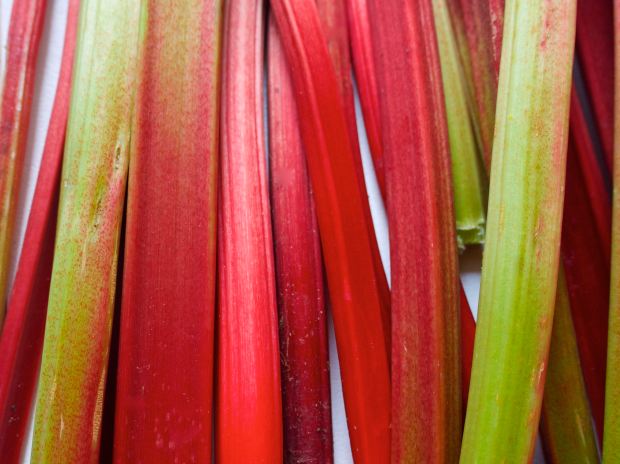 Even with the big day itself getting precariously close it’s not too late to make one last objectively unnecessary but subjectively delicious thing, and this Rhubarb Vanilla Christmas Fruit Mince from Nigella Lawson’s wonderful book Feast easily fits the bill. Fruit mince is confusing on so many levels – why does it sound like meat, why would I actually want to eat a bunch of sultanas, how is it overly sweet yet rudely flavourless? Not this stuff though. The inclusion of rhubarb, sour-sweet and fragrant as it collapses in the heat, and lush vanilla, makes for a wonderful rush of flavour. It’s hefty and plummy and wintery yet somehow lively and vivid. The dried fruit absorbs all the intense flavour as it cooks, and it all tastes immensely luxurious. Plus it’s incredibly easy to make.

(I freely acknowledge that I went slightly overboard with these photos, like, you can barely even see the jar in this one, but the decorations were just sitting there on the table! What was I to do! Be tasteful? At Christmas?)

* I only had one vanilla bean, so added a couple of teaspoons of vanilla extract at the end. Vanilla beans are also sometimes called vanilla pods. I also just did double sultanas because I don’t really favour raisins.

Place the rhubarb, sugar and mixed spice into a good-sized saucepan. Scrape the seeds from the vanilla beans into the pan and then slice up the beans themselves and throw them in too. Turn the heat to medium bring it to a good simmer, stirring to prevent the sugar burning. After five minutes, add the dried fruit and simmer for a further thirty minutes, stirring often. Remove from the heat and stir in the alcohol. Transfer into clean jars.

Nigella reckons this makes 1.25 litres, I got a bit less but still heaps so by all means have some jars on hand.

Obviously you need to choose your audience here but a small jar of this would make a lovely gift. It can also, of course, be made into slightly untraditional pies, or stirred into cake batter, or heated up and spooned over ice cream. Nigella recommends spreading it on toast like jam, I think it would work particularly well on a toasted bagel. I do enjoy marinading myself in Nigella’s Christmas-related material – nothing else quite makes me feel so resolutely contextualised in the season.

Meri Kirihimete! Whether Christmas is something you delight in, politely acknowledge, or have no connection to, I certainly hope either way that the 25th is a nice day for you.

PS I absolutely recommend my last blog post where I rounded up a ton of edible gift idea recipes. The day is still young!

title from: A Funny Thing Happened On The Way To Love by Barbra Streisand, an unreleased song of hers that would be otherwise a standard workhorse pleasantry if not for the remarkable D5 belt at the end that she holds for ages, truly one of the queens of possessing vocal chords.

Pop A Top by Andy Capp. This early reggae track from 1968 is joyful and mellow at the same time, just what we need at this frantic time of year.

Thursday Girl, by Mitski. This song was my number one most played track on Spotify for 2019, which could be partially to do with my making a playlist consisting only of this song on a loop and spending many hours playing it while staring mournfully into space. It’s just devastating.

Next time: I did make some amazingly good fudge that I’d like to share with you, whether this happens before the end of the year or not is in the hands of Fate (and nothing whatsoever to do with my own diligence.)

PS: What is the true meaning of Christmas if not directly supporting me through my Patreon? It’s like a cordoned-off VIP area where you can access content written just for you: recipes, updates, poems, stories, the opening sentences of the novel I wrote.