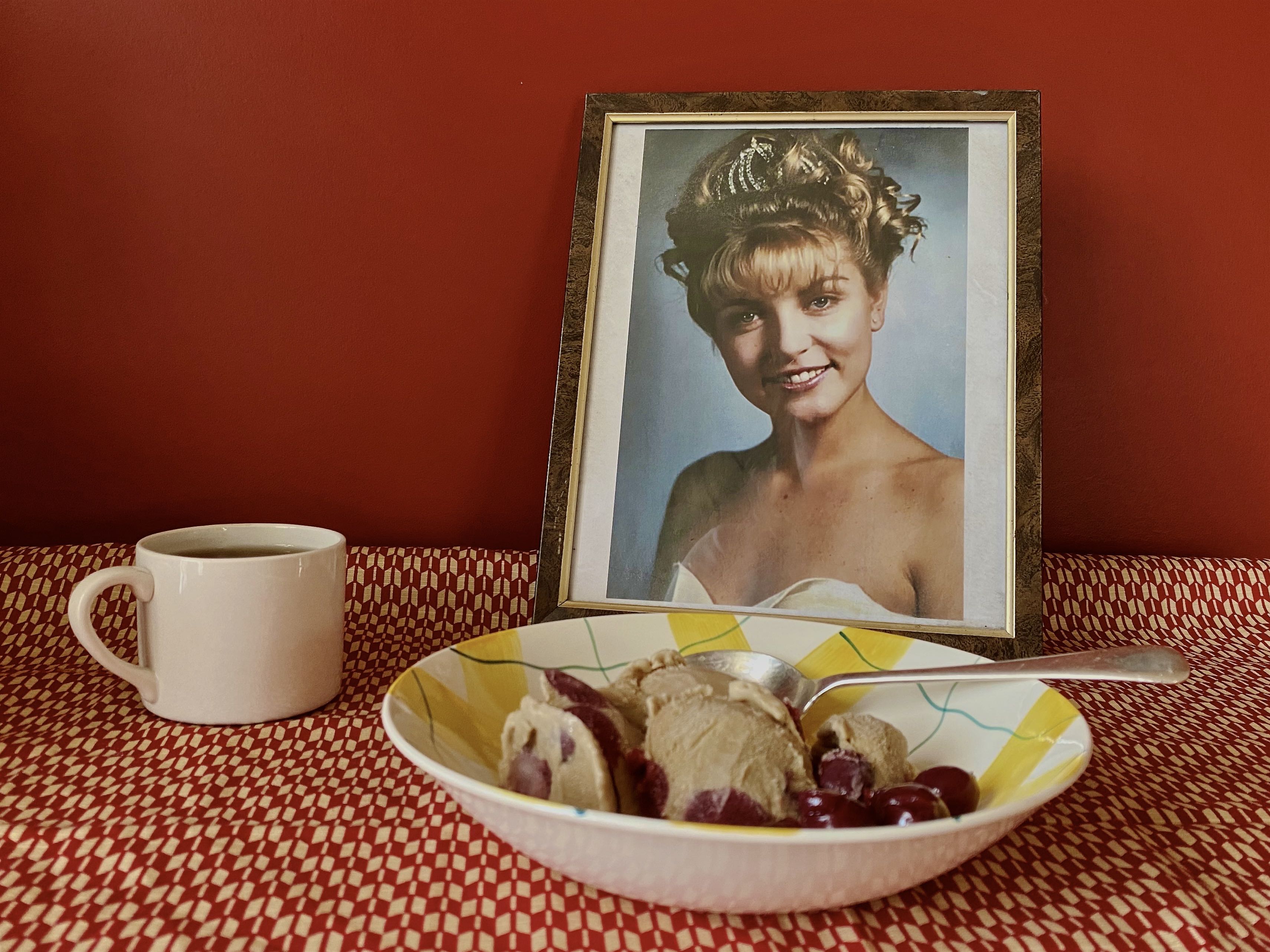 It’s a rare treat if not a luxury to witness your pop culture references made during a past era of your life hold up to scrutiny in the fullness of time; I first devised this Twin Peaks Ice Cream in 2012 for my 2013 cookbook, nearly a decade later I remain as sincerely enthusiastic about the show which inspired the flavour. (Enthusiastic but without any sense of object permanence: I sprinted around my bedroom, looking fruitlessly for a prop which evoked Twin Peaks to use in the photos before I remembered my framed picture of Laura Palmer sitting, very much on display, on my desk; when I blogged the original non-vegan Twin Peaks Ice Cream recipe back in 2017 I mentioned this picture in the text but didn’t even think to include her in the photos.)

Ice cream is my first instinct and my second nature – to me, ice cream is the reception area in my head where all flavours have to check in first before being directed to their appropriate meeting room. When you eat eggs and dairy, making delicious ice cream is beyond easy. I’m chill with admitting that my vegan ice cream journey was a slog, with the occasional frosty pitfall – no fun for someone used to being at ease with this dessert. And if I may be very honest with you, I look back on a few of my vegan ice cream recipes and feel indifferent, which is so much worse than if they’d been merely disastrous. And even the ice creams I loved had a certain chaotic vibe.

This weighed heavily on my shoulders without lifting – my brain loves a self-imposed millstone – but I had to keep persisting. THE perfect ice cream base for all the flavours in the waiting room of my mind was out there and it wanted to find me. And after making the vegan feijoa ice cream – using a method I came up with back in 2012 – I realised the simplest and most effective vegan ice cream was hiding in plain sight this whole time.

The magic ingredient is a can of sweetened condensed coconut milk, and that plus a can of coconut cream gives you a lush, icy, creamy and monumentally delicious ice cream without any whipping of aquafaba or soaking cashews or custard-making or coagulating reluctant oils. It’s a bit of a pain to get hold of the condensed coconut milk, I grant you, but it’s becoming more readily available in supermarkets now and for the utter low-effort ice cream excellence it yields it’s worth a little detective work around that weird corner of the supermarket where they shunt all the vegan food and anything they deem “exotic”.

In this case, it’s the perfect vehicle and backdrop for coffee and cherries, those persistent motifs of Twin Peaks (in a show lousy with persistent motifs, to be fair). You might not immediately think to pair such flavours, and, well, that’s why I’m here. They’re so friendly! Special Agent Dale Cooper levels of friendly! The toasty, nutty bitterness of the coffee and the almond-adjacent sourness of the cherries are made for each other, especially when their sharp edges are mellowed out by the rich, impenetrable smoothness of the sweetened condensed milk. I’m so thrilled to have a vegan version of this particular ice cream at my fingertips, which coincides with my being ready for yet another rewatch of Twin Peaks, and I’m super excited for all the other ice creams I’m going to make using this simple and charming sweetened condensed milk/coconut cream base. Now, I’m going to tell you that you can’t taste the coconut in this ice cream but whether this is trustworthy information is up to you; I consume litres of coconut by-products every week and my ability to perceive it is probably dulled as a result. Certainly, the bolshiness of the coffee overrides most of the coconut flavour on its own.

And the presence of coffee makes this something of a morning ice cream if you will; a bowl of Twin Peaks Ice Cream for breakfast is the best conceivable start to your day.

The vegan version of my cookbook recipe, this is the EASIEST ice cream you’ll ever make – no churning, no whipping, no blending, no nothing. You can absolutely substitute in other flavours (and I will be in the future) but coffee and cherry is a wonderful combination.

Recipe by myself. Makes around 1 litre.

1: Dissolve the coffee into the hot water. Mix this together with the sweetened condensed coconut milk and coconut cream till it’s smoothly combined.

2: Drop the cherries into the ice cream mixture and briefly stir to disperse. Spatula all this into a freezer-proof container with a lid. Place the container in the refrigerator for two hours (or thereabouts, longer is fine) – this adds extra time to your ice cream but I swear it improves the texture and flavour. Transfer the container to the freezer and let sit for six hours or overnight – no need to stir or check on it at all.

3: Allow the ice cream to sit on the bench for about ten minutes before serving to soften it for scooping – it’s not rock-hard straight from the freezer but it needs a little coaxing.

I Get Lonely by Janet Jackson. It’s so elegant, with that spacious, airy opening sequence and the percussive finger snaps and the silhouette-emphasising choreography and the bustier over the white shirt and the sumptuous soul production, it’s super seductive yet also makes you feel like you’re sitting in a darkened room by a fan heater while rain hits the roof. Truly one of Ms Jackson’s very best, I loved it then and I love it still.

Natural’s Not In It by Gang of Four. At first, it’s like okay right they’re just repeating the same chords over and over and then after a while it’s like – if they change the melody in literally any way, if there is even one single goddamn bridge I will throw a table through a window and then you press repeat on the song every time it ends for the next forty minutes.

Twin Peaks Theme by Angelo Badalamenti – since we’re here – looped for ten hours: my all-or-nothing attention span either wants it over in thirty seconds or NEVERENDING and this is music made to be listened to in the latter fashion. Badalamenti’s music is more like another character on Twin Peaks – his ability to distil the vibe of the show into music form is unreal, utterly peerless. Like you could listen to his composition without ever having seen Twin Peaks and yet somehow you would know everything you needed to know and quoting deep cut lines from the show, and you’d probably be dressed up as a minor character with unsettlingly faithful attention to detail.

PS: If you like my writing and wish to support me directly, there’s no better way than by stepping behind the claret velvet VIP curtain of my Patreon. Recipes, reviews, poetry, updates, secrets, stories, all yours on a monthly basis.