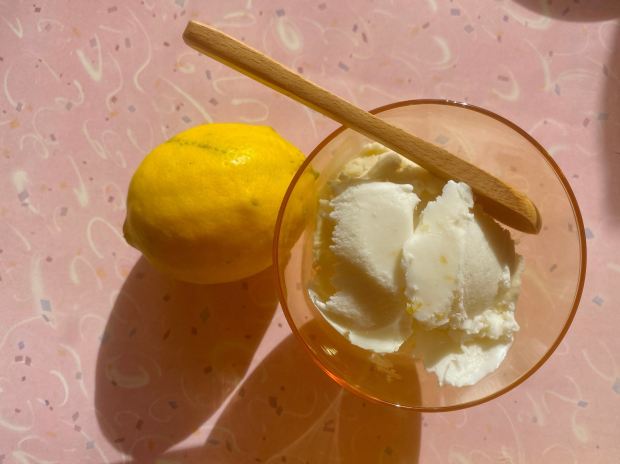 It helps, when feeling on the back foot, to place what you’re doing within a wider context, to ground it, to lend precedence and credence. If you’re plagued with Main Character Syndrome like me you’ll already use this trick on a daily basis but for the rest of you it’s a great way to go from “another ice cream recipe? Really?” to “What do these artists have in common: Andy Warhol. Keith Haring. Yayoi Kusama. Gertrude Stein – that’s right, they incorporated repetition into their work and now they’re super iconic.” And then you point to yourself while saying “iconic”, thus indelibly cementing the association of you and that word. And then someone hands you a million-dollar record deal and it’s a hop skip and a jump to the top of the charts!

So yes, this lemon ice cream enters the room piggy-backing on my Twin Peaks Ice Cream method – which itself was a spin on the Feijoa Ice Cream method which was a vegan version of my original Feijoa Ice Cream! Because it’s such an easy and excellent way of making ice cream you can expect to see it pop up again sporadically in the future in further untold flavours, and should I ever want to repeat any of my existing ice cream flavour ideas I’ll probably be retroactively applying this method to them. (Although aquafaba will always have a place in my heart and my freezer.)

This iteration makes the most of the lemons which have happily burst into season just in time to give us some mid-winter sunshine. The scent of fresh lemon is enormously uplifting – although I take umbrage with the proliferation of TikTok videos claiming that eating lemon peel causes near-instant euphoria – and its sheer pure sourness matches well with a backdrop of lush coconut, giving a cloudless, sun-warmed beach towel vibe to even the frostiest of days. This is one of those recipes where you definitely still taste the coconut in the finished product but when the pairing is this perfect it’s a bonus, not a drawback. Unlike the Twin Peaks and Feijoa Ice Creams, I gave this mixture a brief go-over with electric beaters to aerate it before freezing. Where those ice creams were quite dense, this one is lighter and creamier – as befits its more delicate flavouring. 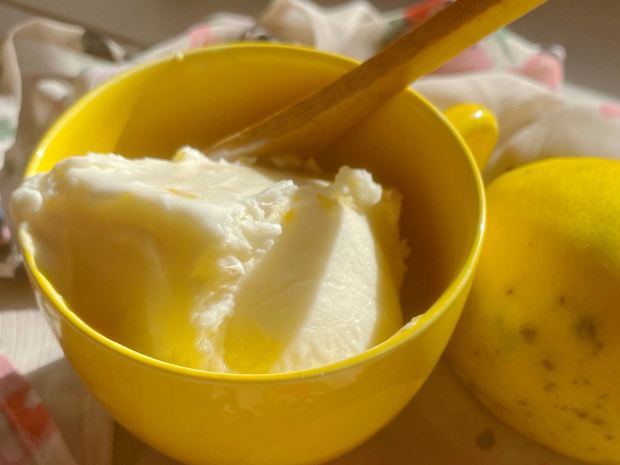 You’d think ice cream would be the last thing anyone would want to make in the middle of winter but my favourite food knows no seasons, and the method is so relaxed and undemanding that I look forward to making this almost as much as eating it. And while there are few rewards for a life shackled by capitalism, a small good thing you can do as an adult to exert control and thumb your nose at practicality is to sit by a heater in your underwear and eat ice cream. I thoroughly recommend it. If you’re in the northern hemisphere and enjoying actual summer, I have to warn you that the seasonal inverse of this activity (eating a hot casserole in a swimming pool) just isn’t the same – but your time will come soon enough. 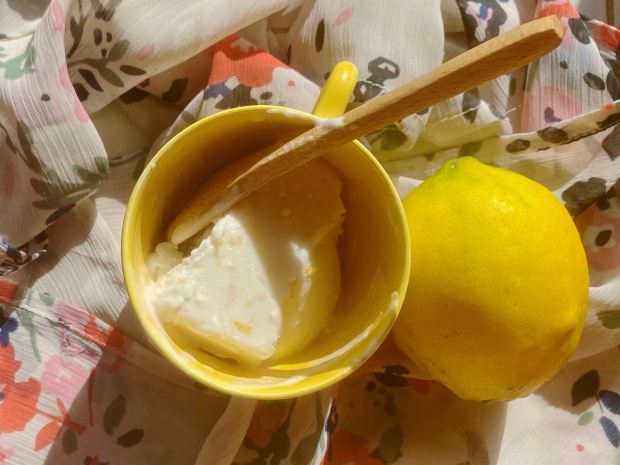 No-churn, three ingredients – vegan ice cream doesn’t get simpler than this. Recipe by myself.

1: Place the coconut cream, sweetened condensed milk, and lemon juice and zest into a mixing bowl and beat on high for about three minutes using electric handheld beaters. If you don’t have electric beaters, just use a whisk and some upper body strength. You’re looking for an aerated texture – it won’t thicken or whip up but incorporating some air in it at this point will give a creamier texture later.

2: Stir in the citric acid if you’re using it and pour the mixture into a freezer-safe container. Place the lid on top and refrigerate the ice cream mixture for two hours before freezing for about six hours or overnight. It should be pretty scoopable straight from the freezer but may require a ten minute sit on the bench to soften first. 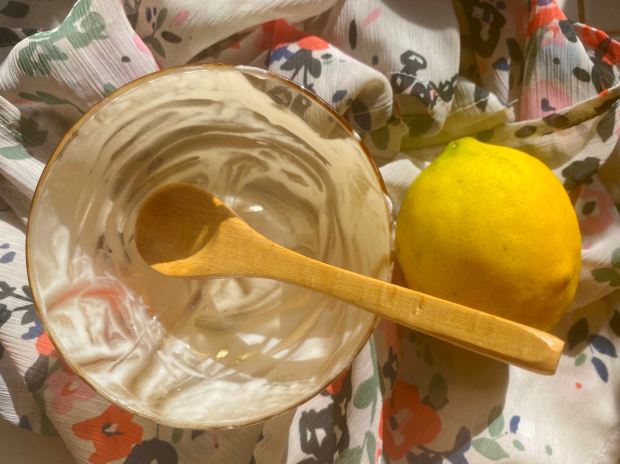 Modern Dance by Pere Ubu. Jaunty and frug-y yet abrasive and awkward and coincidentally an excellent use of repetition? I love it!

You’re Dead by Nora Tanega. Cheerfully ominous, blithely jumping around time signatures, and exuding so much cool it could freeze a thousand tubs of ice cream.

There Will Be A Miracle by Mary Testa from Michael John LaChiusa’s 2005 off-Broadway musical See What I Wanna See, a mellow, tranquil oasis of calm in a fairly dark musical. The lyrics to this song are still dark but the melody is so gentle and Mary Testa repeating “there will be a miracle” is so soothing that you can zone out and vibe to it and feel pretty good about the world for a minute or two.