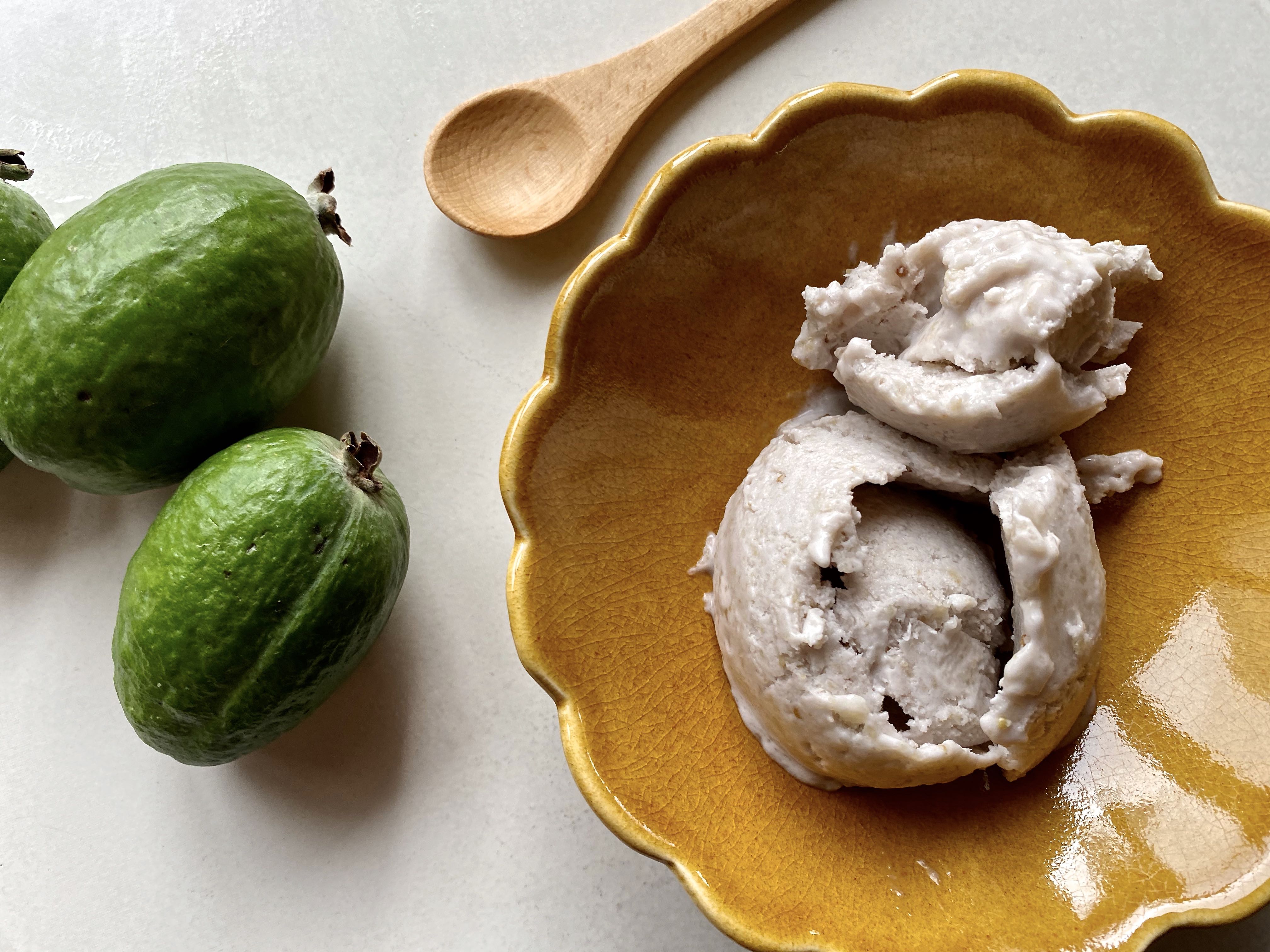 On the back-left burner of my mind is a cookbook idea loosely based around taking every significant recipe I’ve ever made and interpolating it into a new vegan version of its former self. This idea is simmering away quietly and probably going to evaporate completely at some point – cookbooks need a good reason to exist! – but the structure is appealing – I like to think of all that I can eat rather than all that I can’t. Making vegan versions of old favourites is nothing new – we seek the familiar and the familiar comforts! Just type “vegan copycat” into Pinterest for a barrage of recipes. Rewriting your own recipes to fit your current self is a little different though – and since I wrote this blog for ten years before going vegan in 2018 (not to mention publishing a very meaty and buttery cookbook in that time) there’s a lot left behind which I’d love to bring with me. That’s life, isn’t it, taking what worked, reworking that which no longer does, emerging more whole than if you’d discarded those parts of you completely.

It’s also not that deep. What I’m saying is, I’ve been thinking a lot about an ice cream recipe I made back in 2012 and I wanted it, bad. 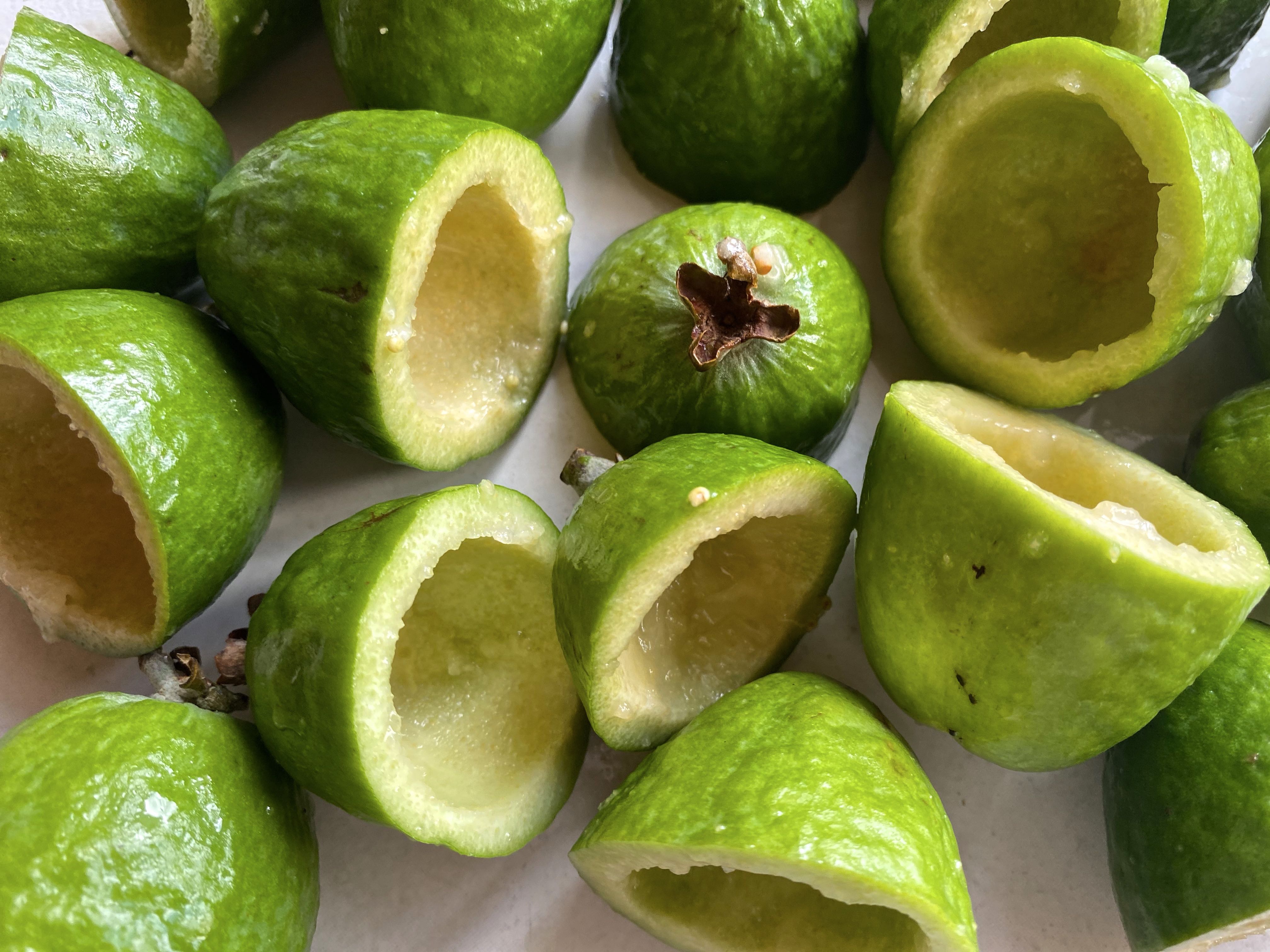 A staunch champion of the rain and cold, even I feel a trifle lowered as summer’s stone fruit faded from view and the mornings were suddenly pitch black thanks to the entirely unnecessary daylight saving clock change (I will die on this hill!) To soften this blow comes the emerald in autumn’s crown: the feijoa. If you’ve never eaten this charming fruit before, imagine the soft gritty reticence of a canned pear coupled with the giddy just-been-kissed zing of passionfruit; that’s more or less the flavour and as you can imagine it makes the most wonderful ice cream. Back in 2012 I combined, quite off-the-cuff, sweetened condensed milk and Greek yoghurt with the feijoa flesh – as per usual it was a no-churn affair and it tasted spectacular.

For the last couple of feijoa seasons, I’ve been wondering whether I could just replace the condensed milk and yoghurt with their coconut counterparts, but neither ingredient is particularly cheap and I was nervous about the potential expensive failure. It also seemed too simple – surely some hard work needs to be involved to make it legit, like, do I have to whip aquafaba or blend up a mountain of soaked cashews here? 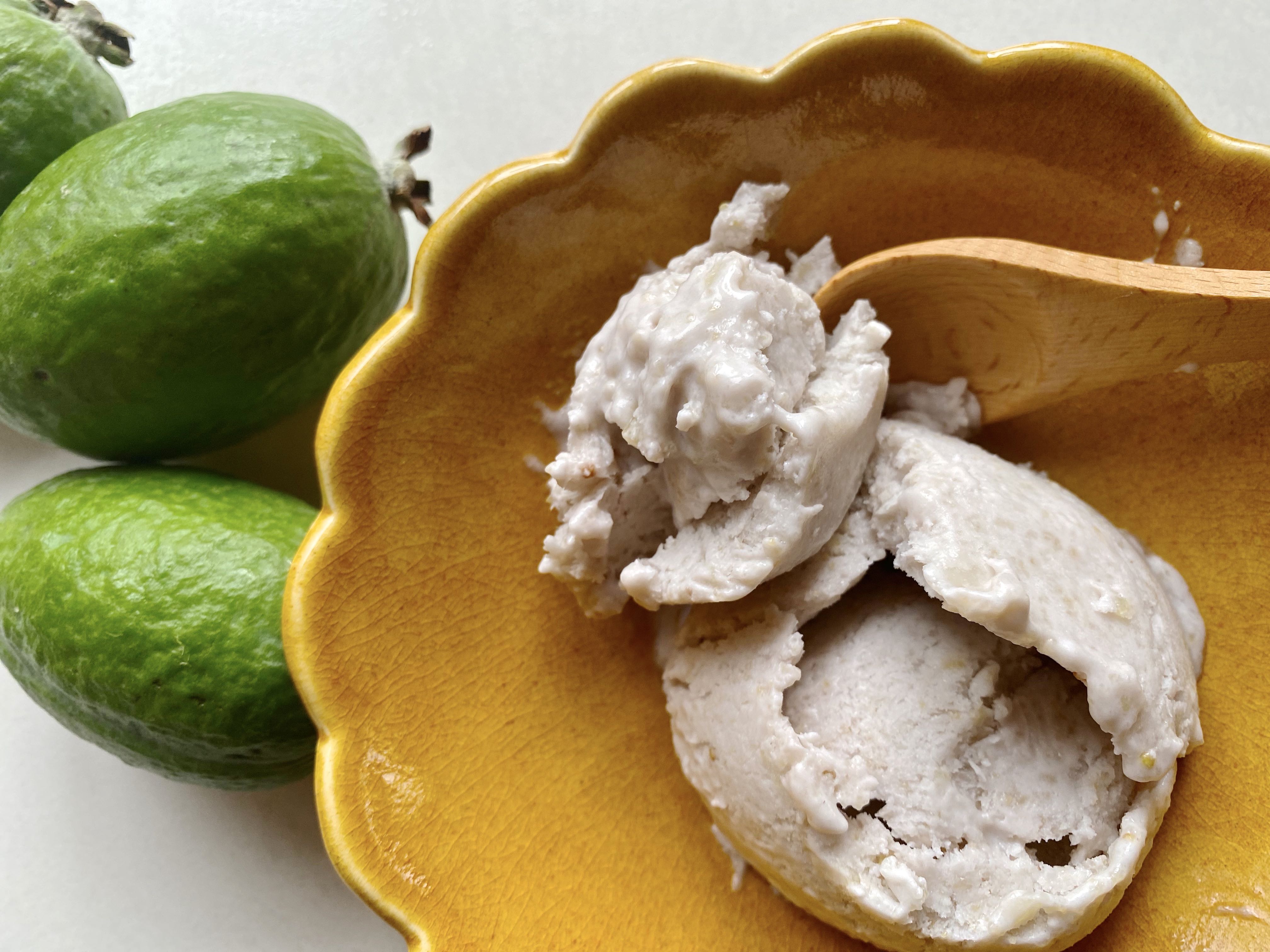 This ice cream is heavenly, with the light sour richness of the yoghurt and the PVA glue-sticky condensed milk meeting right in the middle to form a velvety ice cream base to uplift the gloriously perfumed and tangy feijoas. It’s utterly delicious, somehow tasting like rainclouds and sunshine simultaneously, a truly autumnal dessert.

♬ Love Is In The Air – John Paul Young

As with all my ice cream recipes, this is no-churn. Another hill I will die on (along with disparaging daylight savings at any opportunity) is that we’re all in the clutches of Big Ice Cream Machine and we don’t need to be! Without the slightest bit of interference this feijoa ice cream is creamy (tautology perhaps but I can’t think of a more appropriate word), rich and utterly lush.

It’s also not terribly attractive – despite the promise of the Wizard of Oz-tinted feijoa exterior, none of that jade shade comes along for the ride and the flesh is more akin to oatmeal, or a stack of manila envelopes. It’s probably not going to light up your Instagram feed (as Nigella Lawson notes in her chapter “A Loving Defence of Brown Food” in Cook, Eat, Repeat: “the medium that has probably done most for the rampant championing of the colourful over the drab”) – but it tastes wonderful and that’s what counts. That being said, a halved feijoa on the side brings not only a welcome pop of green for the eyes to feast upon – you also get to eat more feijoa. An easy win. 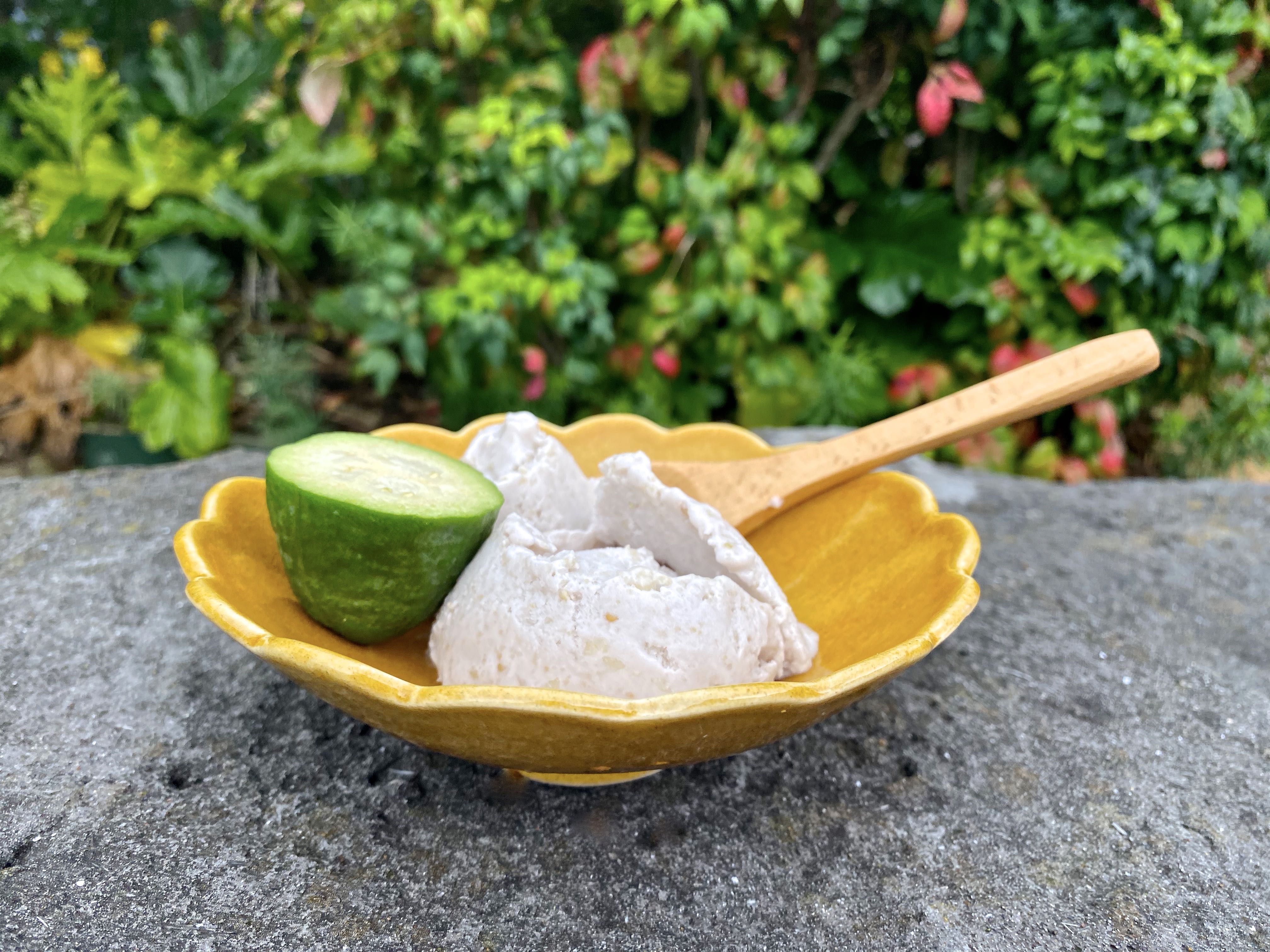 This is the easiest no-churn vegan ice cream – there’s no escaping its beige colour but it shines with pure feijoa flavour. Recipe by myself.

1: Halve the feijoas and scoop their flesh into a mixing bowl, really digging in with your teaspoon to get as much out as possible. Use a stick blender to puree the feijoa flesh. You can also use a food processor or mash the fruit vigorously using a fork or a potato masher – in which case the texture will be a bit rougher but that’s all good.

2: Stir in the condensed milk, yoghurt, and lime juice. If your feijoas are on the young and sour side, you can leave out the lime juice – it’s better for super-ripe fruit.

3: Transfer this beige-brown mixture into a freezer-safe container with a lid. Refrigerate for one hour (although longer is fine if you forget about it) and then freeze it for six hours or overnight. There’s no need to stir or blend it at any stage – just shove it in and forget about it. Leave it to sit for ten minutes on the bench to soften before eating.

Makes around 900ml – 1litre, depending on your feijoas.

Note: You can happily use more than fifteen feijoas but I wouldn’t use any fewer, otherwise you just won’t end up with that much ice cream. If you don’t have feijoas I reckon this would work with bananas or canned pears – about four bananas or two drained cans of pears should do it – and I’d definitely add lime juice if using either of these fruits, especially the bananas. 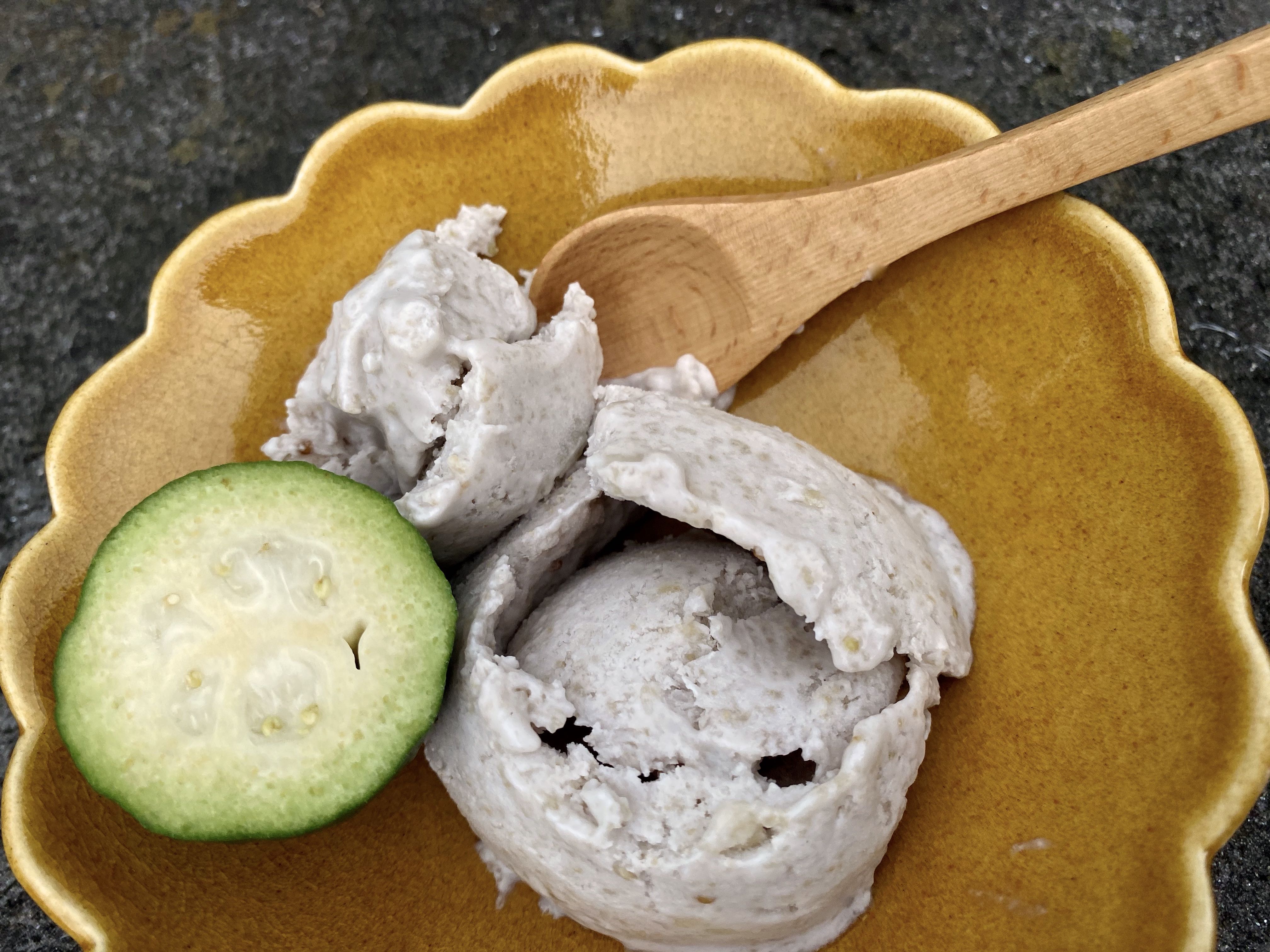 Dues, by Ronee Blakley. I re-re-rewatched Robert Altman’s Nashville recently, and while Gwen Welles’ character is my favourite, it’s Ronee Blakley’s performances that I love the best – her voice has this soft, buttery sorrowfulness to it which is just so affecting.

Love’s Revenge by Clifton Davis from the 1971 Broadway musical Two Gentlemen of Verona, composed by Galt McDermott who also did Hair – and you can hear it for sure. Two Gentlemen isn’t as instantly memorable but the songs still have that sunny, shambolic loveliness – very present in this ballad and in the opening song Summer, Summer.

Germfree Adolescents by X-Ray Spex. The thing about this song is, that I have to listen to it ten times a day. The way it’s so hypnotic – the way Poly Styrene’s voice soars!

PS: As well as being feijoa season it’s also ME season – by which I mean, my birthday is on Saturday – and if you enjoy my writing and wish to support me directly, there’s no better time than now to do so by joining me behind the claret velvet VIP curtain of my Patreon. Recipes, reviews, poetry, updates, secrets, stories, all yours on a monthly basis.