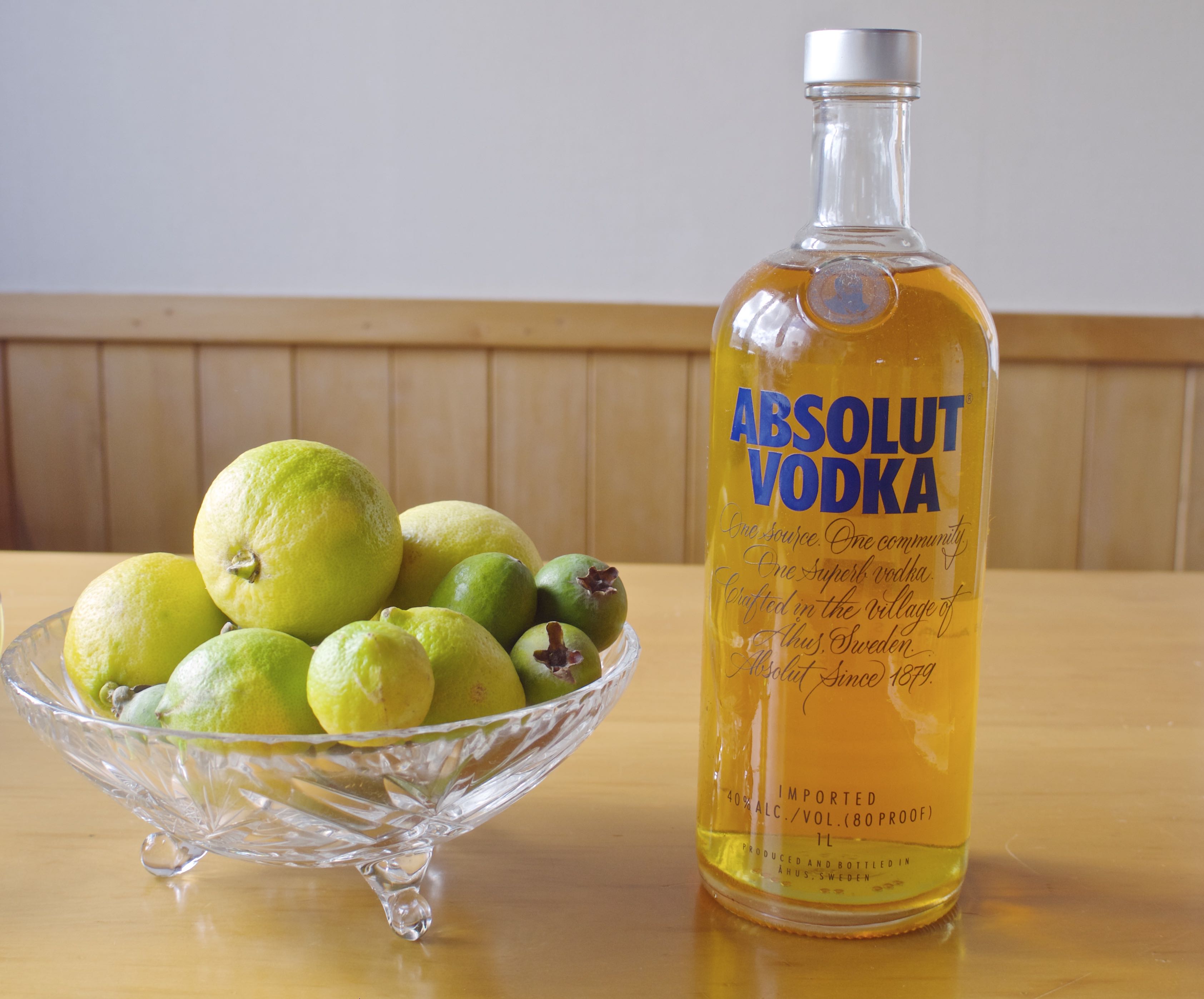 I’m not going to call this Homemade Feijoa Vodka recipe zero-waste — yes, you’re using the skins of fruit that otherwise would’ve been thrown out, but driving into town to buy a bottle of vodka rather undermines any sense of environmentally pietistic efficacy. But there is something fun, thrilling even, about using scraps you would’ve discarded, making something from nothing, it feels like you’ve discovered the secrets of alchemy, or stopping time. And never was alchemy so low-effort: just hiff the feijoa skins into a jar, top with vodka, let it all sit, and there you have it.

There was a moment of horror when I first unscrewed the lid and tried the vodka — it was giving nail polish remover, and had this disturbing and lingering metallic finish — because the only thing worse than being wasteful is going out of your way to repurpose waste and then wasting that, to say nothing of the fact that vodka doesn’t grow on trees. To my immediate relief, adding some sugar made it spring to life, turning it from acetone into something not just merely potable, but delicious: lusciously fragrant, delicate, deeply feijoa-y, silky-textured.

There are a lot of things I miss about bartending (it would be more efficient to list what I don’t miss: the pay) but I was particularly lucky to have a lot of freedom when I ran Motel to just dick around with infusions and experiments and whatever I wanted. There isn’t quite so much call for jars of macerating liquor now that I live with my parents in the middle of nowhere (nor, sadly, is there a company card to blithely put the costs on) but we do what we can, and making this Homemade Feijoa Vodka reminded me of those happy times, trying my hand at tepache, infusing rum with various whole spices, and so on. To that end, this feijoa vodka would be excellent shaken into cocktails: I’m thinking a Feijoa Gin Sour, with about 1/2 a shot of it in an otherwise straightforward sour of gin, sugar syrup and lemon juice; a sort of Feijoa Crumble vibe with apple juice and cinnamon syrup; a Feijoa Collins or Gimlet or — prosaically but always a valid choice — in a long glass, topped with Chi and a slender sliver of cucumber to make a Falling Water.

After doing some taste-testing I can confirm that it’s also about smooth enough to be sipped on its own, the way you might with a Cointreau or similar after dinner, but it really has to be fridge-cold for this.

Obviously I’ve had to wait a month for this vodka to sit around before I could write about the recipe so I hope there’s still enough Feijoa Hours left in autumn for you to make this for yourself. If you don’t live within reaching distance of a feijoa, or if you detest them but like the idea of fixing your own liqueurs, there’s always my (astonishingly good) Passionfruit Liqueur and (not quite as blow-your-hair-back but still excellent) Mandarin Liqueur recipes. As for accruing all those feijoa skins, I kept a container in the fridge for everyone to put them in once they’d scooped out the flesh, but to hasten the process, there’s not much better you can do with this fruit than make my Feijoa Ice Cream. Three-ish ingredients, no-churn, tastes like a dream. 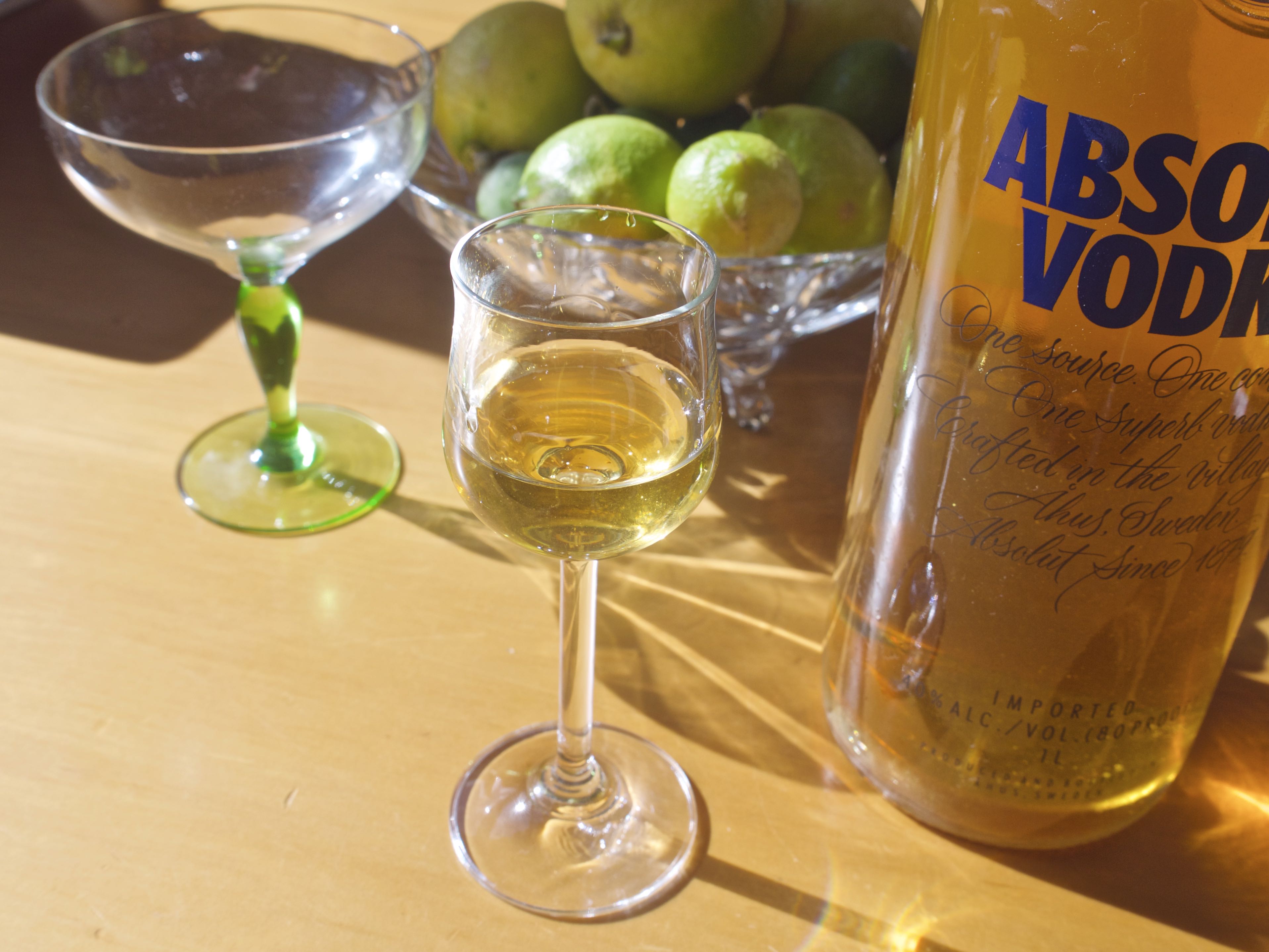 Stunningly fragrant, and mellow enough to be sipped on its own, but obviously begging to be used in cocktails, all this requires of you is a little patience while it infuses. And a lot of feijoas. Recipe by myself.

1: Find a large glass jar of around 1.5 or 2 litre capacity. Trim any of those brown, x-shaped stems from your feijoa skins if they have them, and then pile these bright green skins into the jar, pour over the litre of vodka, place the lid on the jar and put it in a cupboard somewhere and forget about it for a month. Don’t throw out the bottle, as you can use it for the finished vodka.

2: One month later, strain the vodka into a measuring jug, discarding the feijoa skins (I imagine our compost bin was a scene of Dionysian revelry for the rats and worms after I threw them out). In a smaller jug or bowl, stir the 3/4 cup of sugar and 1/2 cup boiling water together until the sugar has dissolved, tip this into your jug of infused vodka, pour it all back into the original vodka bottle using a funnel, and that’s it!

Makes 1 and a bit litres. Store in the fridge.

I Feel Insane by Daisy Chainsaw, the combination of the abrasively raucous guitars and KatieJane Garside’s air-deflating-from-a-helium-balloon voice is chaotic and perfect (for something less confrontational, Natural Man has a kind of acoustic Nirvana vibe).

Hard To Say I’m Sorry by Az Yet. And! After! All! That! You’ve! Been! Through! No disrespect to Chicago (the band, not the city, no disrespect to them either though) but there is no way this song wasn’t written expressly to be sung by a close-harmony 90s R’n’B group, it simply didn’t exist before then and could never exist again.

Adagio from Spartacus by Khachaturian, impossibly beautiful — specifically the crescendo from about 5 minutes 50 onwards, so if you’re impatient like me you’ll want to jump right to that point to see what I’m talking about, it’s absolutely unreal — verging on irresponsible — for a piece of music to be this stunning, the first time I heard it I burst out laughing from sheer nervous emotion, it’s like falling in love and being run over by a herd of rhinoceroses at the same time.