I have but two modes: asking “are we there yet?” every five minutes; and then, without warning, forgetting completely that we’re going somewhere and arriving at the destination in a state of unexpected incredulity, saying “who put this here?” and “what’s all this then?”

This passionfruit liqueur recipe allows me to keep a foot in each of these lanes – first, there’s the infuriating, clock-watching wait for the flavour to abscond from the passionfruit pulp to the vodka in which it’s soaking. That occupied me for about a week, then I just totally forgot about it and two months passed – probably more than was even necessary to make a decent liqueur! – before I went to look in the cupboard in the garage for something else and found there the jar of fruit and liquor, patiently waiting for me like a small child at the gates of a boarding school – possibly Dickensian – on an exeat weekend.

Depending on your neurological makeup the waiting aspect of making this liqueur may not come heavy with psychological roadblocks and learnings, but either way, it’s certainly the hardest part of the recipe. Aside from the wait, all that’s involved is throwing fruit and sugar and alcohol in a jar, which yields a liqueur of such exquisitely balanced sweetness and fruitiness, with a silky bod and a long, zingy finish – it tastes of strenuous effort but does not ask it of you.

This is really a recipe for windfall times – we were lucky to have a heavily laden passionfruit vine absolutely lousy with fruit, and I definitely wouldn’t make this out of season. However, you could probably use any fruit here and in the interests of accessibility I encourage this, but there’s something so heedless and merry about the passionfruit which lends itself to a frivolous liqueur as opposed to, say, the stern workhorse apple. They’re not like the other fruits, they’re a cool fruit! And passionfruit’s lip-smacking sourness and beachy sweetness are just the ticket when suspended in alcohol. As for what to do with the liqueur, I imagine it would bring great perkiness to the already perky daiquiri, or you could make a zesty version of the French Martini by shaking this liqueur up with Chambord and pineapple juice. You also can’t go wrong by simply pouring measures of it into small glasses for sipping before or après dinner – or both. And of course, if you can bear to part with it, it makes a great gift.

I was hoping an analogy or metaphor would come to me by now to link what I’ve just said to what I’m about to say – something to do with patience, probably – but there’s no way to sugarcoat this news, let alone soak it in alcohol for forty days; I found out this week that Tenderly, the publication I’ve been writing for since June 2019, will be closing down soon. This is terribly sad on many levels, not just because I’ve lost my main source of employment. Tenderly offered me untold editorial freedom and I was proud to be part of its incredible writing team. There are fewer places than ever for a writer to make their living and I hate to see Tenderly join these ex-publications, but I also feel like the work published there was really important! (Yes, even my “31 Great Songs For Horse Fans” playlist.) A few stories remain left to be published and then that’ll be that. I’m glad I got to be part of it and I’m grateful for the opportunities it gave me.

Between this and my recent birthday (which we’re still dragging out, for Main Character purposes) there’s truly no better time to join me on Patreon if you like what I do and want to support me directly and have the means to do so! My entire Patreon archives are available for as little as a dollar a month – in fact, I’m scrapping the higher levels so that literally everything is available for a mere dollar because if I’m taking peoples’ money I want to be able to sleep at night about it. If you like what I do but feel like Patreon is too much of a commitment financially or emotionally that’s also totally fine as well, a great choice in fact!

Finally – back to the passionfruit – if you’re blessed with multitudes of this fruit and have made the liqueur and still have heaps leftover, I wholeheartedly recommend this passionfruit panna cotta recipe from back in March. 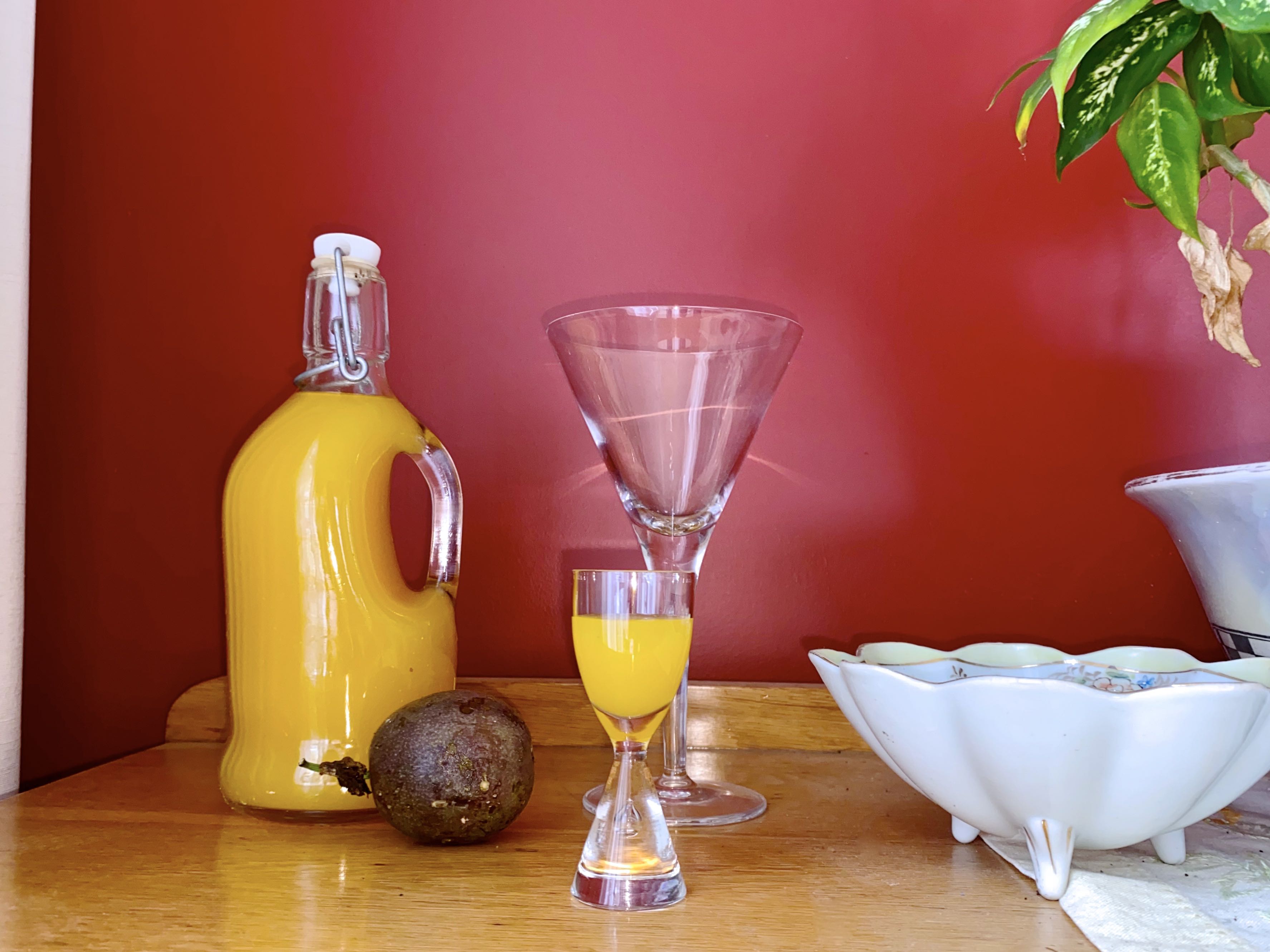 The hardest thing about this delicious homemade liqueur is the waiting. Recipe by myself.

1: First, sterilise a 1-litre jar. Once that’s done, start halving your passionfruit and scooping their pulp into the jar. Stir in the sugar to dissolve it a little – although the sitting around will take care of that eventually, so don’t feel you have to exert yourself.

2: Empty the bottle of vodka into the jar, add the vanilla, give it another stir, then screw the lid on and leave the jar in a cupboard for about two months. Every once in a while, pick up the jar and give it a jiggle before returning to the cupboard. You’ll probably do this every day for a week and then completely forget about it: this is fine.

3: Once this wait is over, strain the contents of the jar through a sieve into a jug, and really stir and press down with a spoon to extract as much flavour as possible from the pulp. Pour this sunshine-coloured liquid through a funnel into clean bottles, and there you have it: passionfruit liqueur. Give the bottle a gentle shake before serving, as the sieved pulp tends to settle a little.

Note: the vodka I used was 80 proof which isn’t terribly punchy, hence the longer wait time to extract the flavour from the passionfruit – if you can find a bottle at 100 proof or over you can cut that time by at least half.

The White Keys and The Black Keys by Hazel Scott, from the 1943 film The Heat’s On, the way she plays two pianos at once so effortlessly, elegantly, joyfully! She was truly the greatest.

Every Story Is a Love Story/Fortune Favours The Brave by Sherie Rene Scott and Adam Pascal from the 2001 Broadway musical Aida. These songs are meant to be heard as one – starting with the introspective bloom of Every Story and Sherie’s mellow belt, suddenly zooming a thousand miles an hour into the rollercoaster energy of Fortune Favours and Adam’s huge, crunchy vibrato, it’s so much more thrilling than you can imagine. Elton John wrote this with Tim Rice if that motivates you to click through (it also might demotivate you, but at least you’ve got all the information.)

PS: I’ve already talked about it but once more with feeling, if you like my writing and wish to support me directly, there’s no better way than by stepping behind the claret velvet VIP curtain of my Patreon. Recipes, reviews, poetry, updates, secrets, stories, all yours on a monthly basis.